We were excited when Behemoth first announced their North American tour to the point we had to see them not once, but twice. The Ecclesia Diabolica America E.V Fall tour ranks high in our book of shows of 2018 as At the Gates and Wolves in the Throne Room joined them on the run. The trek kicked off on October 20th in Phoenix, AZ and scheduled to wrap up on this Saturday (24th) in Los Angeles, CA. This recap is for the group’s New York City sold-out performance on November 3rd at Playstation Theater.

Wolves in the Throne Room

Darkness was the theme for the night as it didn’t take long for the venue to pack up with eager fans, marking it one of Behemoth’s biggest headlining shows in the U.S to date. While fans were hungry for the Polish extreme metallers to introduce their latest effort, I Loved You At Your Darkest, it was time for Washington’s black metallers Wolves in the Throne Room to murk the stage with their ominous presence. Despite the dim-lit platform, the group delivered songs from their latest effort 2017’s Thrice Woven such as “Angrboda,” “The Old Ones Are With Us,” and “Born From the Serpent’s Eye.” 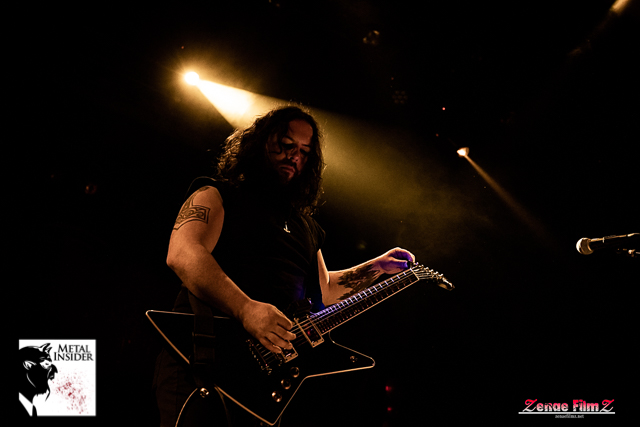 Sweden melodic death metal legends At The Gates were up next as they introduced their first album in four years To Drink From the Night Itself to the New York City crowd. However, they knew their fans wanted to hear their old stuff as well as they gave a fair mix of songs throughout different chapters of their storied career. Ironically, the first three songs were title tracks consisting of their latest effort, 1995’s Slaughter of the Soul and 2014’s At War With Reality. Other songs included “A Stare Bound in Stone,” “Cold,” “El Altar de Dios Desconocido,” “Death and the Labyrinth,” “Heroes and Tombs,” “Suicide Nation,” “The Book of Sand (The Abomination),” “Blinded by Fear,” and “The Night Eternal.”

At this point, many were ready for Behemoth. However, a few lost control of their excitement before the band went on stage as fans cried out,“Slayer!” It didn’t take long for the random screams to settle down as a curtain draped over the stage, and flickering lights and shadows soon followed. Perhaps the group gained some inspiration by Slayer as they’ve spent a few runs supporting the thrash legends. Regardless, it was a Behemoth opening: theatrical, devious, shocking and hypnotic.

In addition to tunes, the group also brought masks, costumes, CO2, blood, and spit to the audience. Whether they enthralled the crowd with their newer songs such as “God = Dog,” or brushed up a few classics including “Decade of Therion” from 1999’s Satanica; these Polish blackened death metal warriors delivered with an extended amount of theatrics that successfully made the house thirsty for more Behemoth.

Nights such as these, whether it was catching up with friends, headbanging along, or getting lost in Behemoth’s phenomenal performance, are evenings that should remind the concertgoer on how vital it is to attend shows. As always, well done, Behemoth.

Ov Fire and the Void

Tags: At The Gates, Behemoth, Wolves in the Throne Room