System of a Down frontman Serj Tankian has teamed up with Arminian rapper Misho and Capital Cities’ Sebu Simonian for a new song, “Introvert (Call Me Crazy).” The song premiered on Billboard Thursday (April 2).

“Introvert (Call Me Crazy)” is a one-off track spearheaded by Simonian that could possibly end up on his full-length solo album, tentatively titled Many Faces.

Simonian described the track as a “pretty random” collaboration. He told Billboard that Misho had sent Tankian the beat, who then wrote two rap verses over it and sent them to him for vocals and a chorus. “I sent it back to them and they liked it, so we decided to make it a three-way collaboration. I wanted to call it ‘Call Me Crazy,’ but Misho said, ‘It’s got to be called ‘Introvert.’ That’s the core topic. So we made it ‘Introvert (Call Me Crazy).’”

“Always fun to work with good friends whom you also deeply respect as artists,” wrote Tankian in a post sharing the premiere on his Facebook page.

“After hanging out a few times over Armenian Apricot Vodka and food, we decided to do a track together for fun and this song is the result. This is the best of Armenian hip hop Misho coupled with gorgeous pop melodies from Sebu with whatever the fuck I do.”

All three artists are of Arminian descent. Misho’s verses were even written in Arminian, a point Simonian highlights for the song’s meaning.

“If you translate it to English there’s a lot lost. He’s basically talking about being kind of an introvert and interacting with people. He’s a very poetic rapper; He uses a lot of twists and turns. You have to be an Armenian rap fan to really appreciate the twists he does with the language.”

In a time when people are experiencing their own kind of solitary isolation, “Introvert” takes on a second meaning. “I’m actually looking forward to how people might react to the song and possibly use it as a soundtrack to the current situation, being physically introverted, isolated in a real way,” Simonian told Billboard.

Tankian spoke at a New Zealand parliament event last month about how the Arminian Genocide during World War I has affected him. The singer/poet/activist is the grandchild of survivors.

System of a Down released their last albums, Mezmerize and Hypnotize, in 2005. The band’s shows with KoRn, Faith No More, Helmet and Russian Circles at Los Angeles, CA’s Banc of California Stadium on May 22 & 23 are so far still on, as are their June & July European festival tour dates. 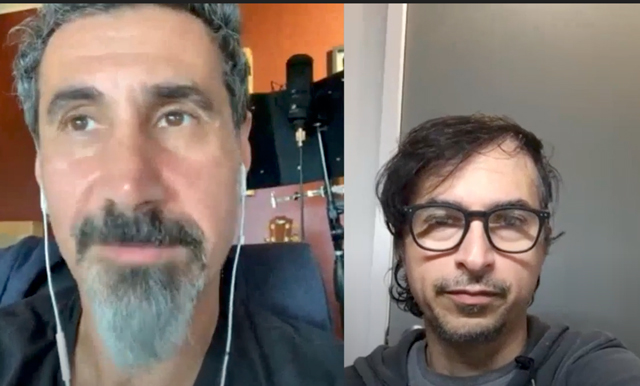