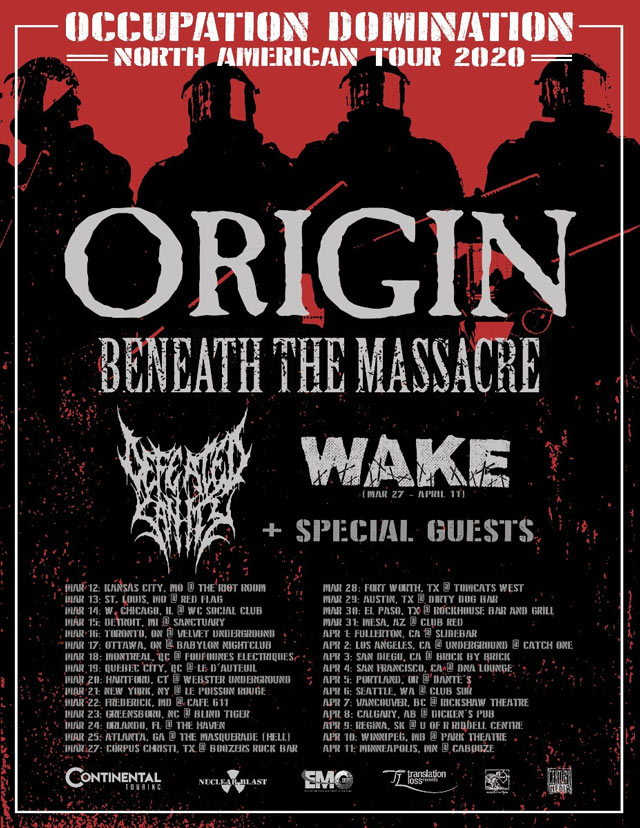 Origin just kicked off their Occupation Domination tour and due to the coronavirus pandemic, the group aren’t sure how far this trek will last. However, they are determined to complete as much as they can of the trek. All Canada dates and a few US dates have been cancelled but that hasn’t stopped Origin, Defeated Sanity and Torn The Fuck Apart to do what they can to perform. Unfortunately, Beneath the Massacre and Wake dropped out from the tour.

Read all statements below:

“TONIGHT !!! The Sanctuary in Detroit is STILL ON with Origin, Defeated Sanity, and Torn the Fuck Apart!!! This may be your last chance to get out of the house for a while, come support while ya can!

Sadly, Due to the restrictions of the Canadian government Beneath the Massacre have decided to drop from the remaining dates of the Occupation Domination 2020 tour and return home.

Origin and Defeated Sanity are still committed to keep going as far as we can! The only game in town! Tour til ya can’t 2020!”

“Due to the recent developments regarding the outbreak of the COVID-19 virus, we regret to announce we are cancelling all our concerts until further notice.

It was a hard but inevitable decision to make.

We would like to thank everyone that came out to those last few shows and we hope to reschedule another North American tour as soon as the situation allows it.

Thank you for your understanding.”

“Origin and Defeated Sanity are still on!

Beneath the Massacre has to go home to Canada as their government asked for their citizens to return home.

We are not going to be able to play any shows in Canada due to this and some US shows have been canceled while others now have a ticket cap to ensure the event can still move forward.

For the canceled shows we are working on smaller replacement venues so keep your eyes peeled.

We are all healthy and will ride this train until it comes to a halt.

Unfortunately there are few other options for us at this point.

Hope to still see you all at one of these shows!Kansas City, St.Louis and Chicago have been absolutely bonkers!”

“Sadly, we’ve been forced to drop off the Occupation Domination Tour due to the Covid-19 outbreak.

Like many others whom we stand beside, our band has been dealt a major blow not only financially, but also a disruption to our upcoming album release. Devouring Ruin hits the streets March 27th and us not being able to support it by playing shows and getting the album into peoples hands – is beyond crushing. We put a lot of ourselves, our time and again, our finances behind this album. This entire situation is extremely disappointing.

Between the cost of our visas, merch to be sold on tour, buying a reliable van to make it to shows and other expenses – this will set us back immensely. The cancellation means we will not have a chance to recoup any of the costs that we planned to cover from our shows and sales. Sorry to everyone that was hoping to see us in March/April. We will see you when this bullshit passes.” 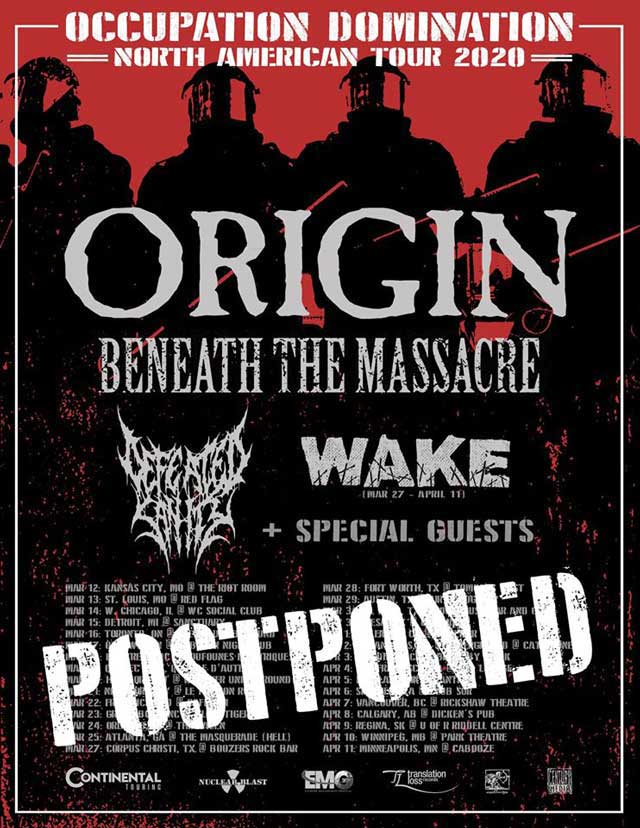