We were crushed when we found out hip-hop surpassed rock music, which was based off of Nielsen Music’s 2017 year-end report. However, based on a recent poll from an online casino operator, bgo.com has revealed heavy metal is the most popular genre in the UK. The poll states that 20% of the UK population favors heavy metal while country, hip-hop, and dance are tied at 15%.

Let’s face it, this is the home of Black Sabbath, Iron Maiden, and Judas Priest. People have debated for 48 years declaring Black Sabbath as the inventors of heavy metal, thanks to their 1970 self-titled debut.

Rupert Till, Professor of Music at Huddersfield University explained:

“New generations are often looking for something new. When they are bored of what is around in the charts, they will often stumble across old scenes that they have never heard of before, something old can seem like something really exciting.”

“Black Sabbath continues to define the genre for me. Without their music, I’d never have wanted to pick up a guitar and play. My first guitar was a copy of Tony Iommi’s.”

Hopefully, this is just the beginning for metal to climb up the charts again. 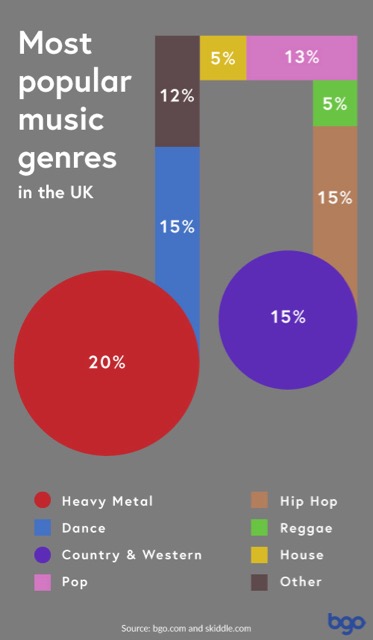