When former Life of Agony drummer Sal Abruscato left the band back in December of last year, we assumed it was an amicable split as Abruscato expressed his family was his focus. However, the group didn’t speak much about his departure as they moved forward by announcing Veronica Bellino as his replacement. Moving forward to today (25th), it seems the split wasn’t necessarily a peaceful one. A feud between singer Mina Caputo and Abruscato has surfaced on social media after a fan asked Caputo if she voted for U.S. President Donald Trump, claiming Abruscato mentioned that she did.

This led to Caputo’s aggressive response:

“Poor Sal was kicked out of Type O Neg kicked out of LifeOfAgony 2X, is a bigot, homophobe-Transphobic Supprtd TransBan in Military He’s a gas-lighter amngst his (wht was his mst loving friends)He’s Envious Spiteful combative & hates his own pathetic life Contemplate that genius!”

Abruscato fired back at Caputo, denying that he ever said anything:

“Look at what this piece of shit tweeted about me on Oct 25. I haven’t said a word in 10 months, just been busy with my album and you suddenly need to talk smack about me. #fuckyoumina#janisjoplinsuglytwinsister”

Both posts have been deleted but ThePrp captured the statements just in time. We have already expressed that the United States is currently facing a sensitive time as the Trump administration is debating on taking discriminatory action against the nation’s transgender population by narrowly defining one’s gender by your genitalia at birth. Unfortunately, these politics have circled into the metal world as ex-Absu guitarist Vis Crom who recently come out as a transgender and now lives under the name Melissa Moore has expressed her departure from the band was due to transphobia from her former bandmates. Looks like there’s a pattern here as Caputo has been faced with transphobia since having come out as a transgender in 2011. 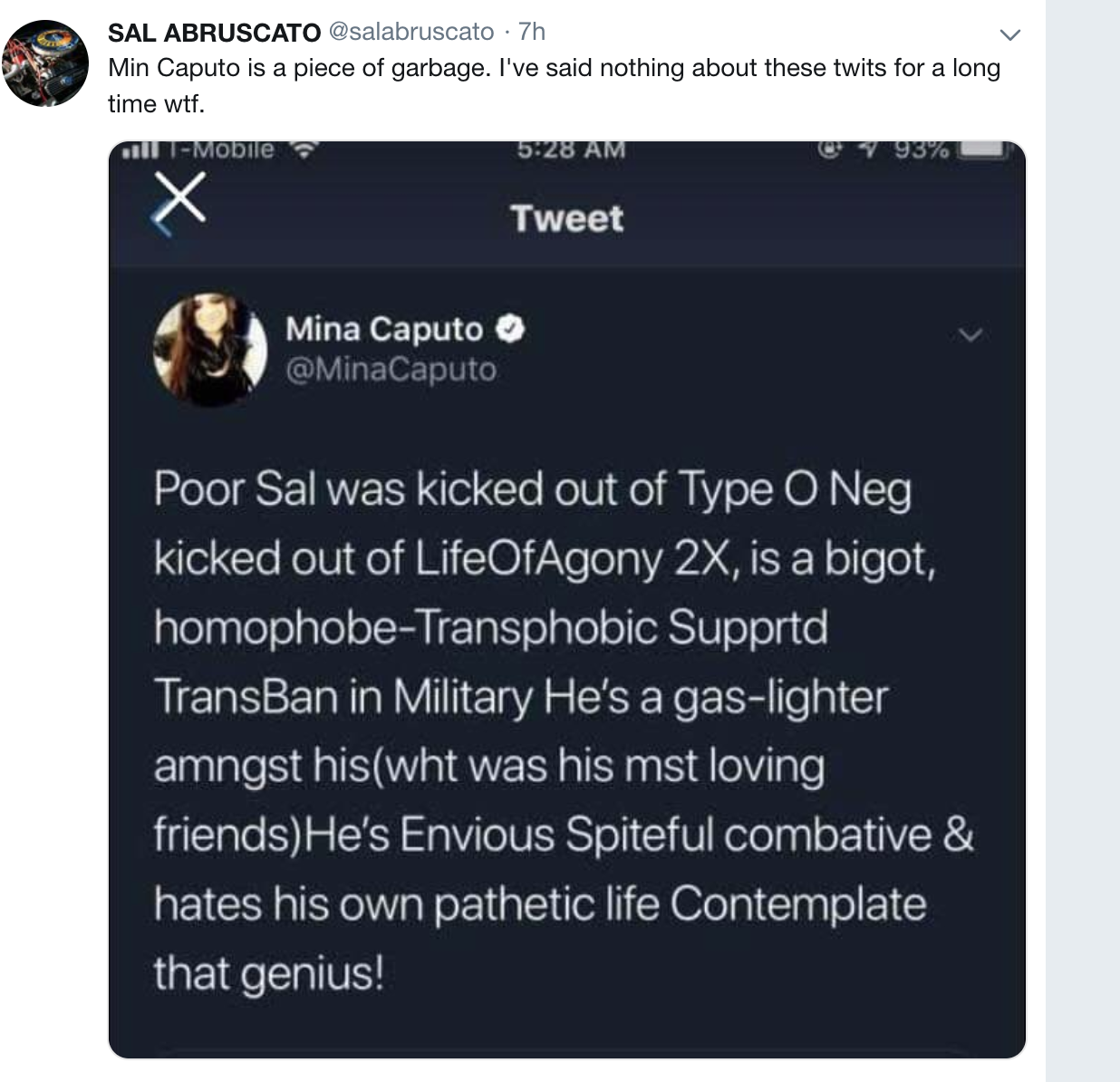 Min Caputo is a piece of garbage. I’ve said nothing about these twits for a long time wtf. pic.twitter.com/5uA2L2wtax

Despite the hostility, Life Of Agony are currently enjoying themselves on their European tour as they have better things to worry about such as having clean clothes for their next show:

As the tensions continue to rise in the United States, it’s best to do what you can to stay humble and refrain from citing judgements and insults. With that said, Life of Agony are teaming up with Sick of it All this December for Two Sick Nights of Agony you can find more information on that here.