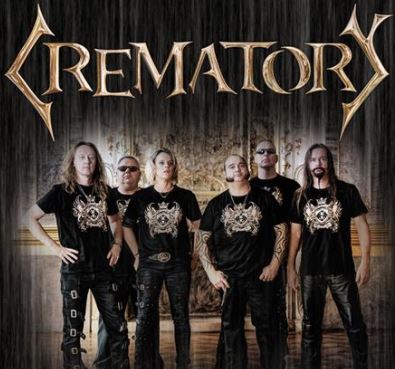 Ready for German sextet Crematory to release their latest album, Oblivion? Well, you better be, or else they might break up. Last week, on a Facebook post to presumably help promote the album, the band threatened to disband, because streaming. In short, they’re not happy with ticket sales for the 15-date German tour, posted about it, imploring fans to get off their asses and buy tickets for the shows, or else they’ll get cancelled. And also, if people don’t buy the physical version of the album, they’re splitsville.

The end of crematory? Is “Oblivion” the last studio album and in may the last tour?

Crematory’s new studio album “Oblivion” appears on Friday, the 13.4.18. we actually want from the 27.4.18, spread over all of may, play our Germany to the new album This will only be possible if you finally get your ass up and buy tickets for the concerts, since the pre-sale is totally fucked up and we will cancel the tour if not at last the sales of our concert tickets

The most important thing is that you buy our new cd or double LP, because if i look at our current license billing, I’m gonna puke We now sell considerably more downloads and streams than CD’s or LP’s and this is permanently dead of each band, because for downloads and streams the band receives only a fraction of the licenses than for real cd sales The result is that the band does not have enough money to release the next album in reasonable quality.

The worst is streamings on Itunes, Spotify, Deezer, napster and all the other shit, because there’s almost nothing left with the band. We have 1,5 million streams from our last album and don’t even sell 1 % of it on CD’s or LP’s.

This can and cannot go on like this! This is not on our own with crematory alone, only we have the balls and we say what is a thing so that people can finally wake up and honor and appreciate the value of music and artists by buying cd’s and LP The music does not disappear on any hard disk, USB sticks or SD Cards in inferior Mp3 quality.

We hope you understand how serious the situation is and will therefore create a special incentive for the CD-purchase on our new studio album “Oblivion” so you can make the CD or double lp and no crappy download or worse stream Buy.

In Each CD and double lp there is a 10 euro merchandise voucher that can be redeemed at our concerts or orders via our homepage. Thus the cd – or double – lp purchase incl. Voucher cheaper than any download, and you have a great digipack with booklet, text, photos and posters in your hand.

So please buy CD’s and LP’s and no downloads or streams, because then there will be no next crematory album if it doesn’t change this time! Don’t let oblivion have been the last crematory album, and let’s not hang on the tour and order your tickets in advance so we can join together some awesome shows, because we still have a couple of years to go Do, but it only makes you decide! Believe in you and especially in crematory! Dmitry Jüllich

So is this realistic? Well, there’s nothing particularly wrong with a band asking their fans to support them, but it seems like they’re going about it the wrong way.  It certainly comes off as childish to essentially tell fans to not listen to you in the method they prefer, which seems to be streaming.  The genie’s not going back in the bottle as far as streaming is concerned. Many of their die-hard fans have probably already pre-ordered the album physically. And if you have to rely on selling tickets by calling your fans lazy, that’s probably not going to endear you to many of them. This post may inspire big fans of the band to buy tickets and the album, but they’ll probably alienate a lot more casual fans that might have been thinking about buying an album or seeing a show before being berated for not doing it yet.