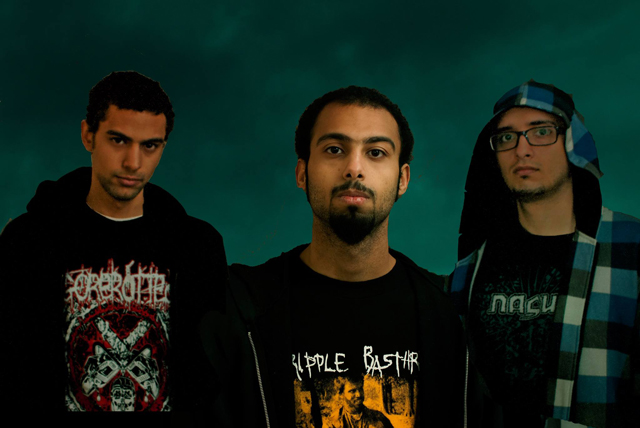 Saudi Arabian grindcore band Creative Waste made history last month when they played the first public metal concert in the religiously conservative Kingdom of Saudi Arabia in more than a decade. The show took place on October 25 at the Bohemian Art Café in Khobar with doom metalers Shamal and instrumentalist Madani Zakari also on the bill.

Speaking with Metal Injection, Creative Waste frontman/bassist Fawaz Al Shawaf expressed trepidation about the show in the days leading up.

“Leading up to the show people, especially bands, were skeptical for the longest time, because they existed in the old generation. A lot of them were being conservative. They were worried. No one’s ready to take the risk.”

There has been good reason for such anxiety. Following a 2009 incident where a large show in the capital city of Riyadh became overcrowded and rowdy, the police were called and two of its organizers (a Syrian and a Saudi Arabian) were arrested and either deported or jailed. Al Shawaf blamed the incident on greed, telling The Atlantic in 2013 that the promotor:

“sold too many tickets in an attempt to cash in, and that ultimately led to the death of the live rock and metal music scene.”

For a decade afterwards, the metal and rock scene in Saudi Arabia went completely underground.

It took the younger, new generation of music lovers to try and get past this incident and make this show possible.

“The ones who organized the show are actually basically newcomers and young. They didn’t even know what grindcore or death metal was. So they weren’t into extreme music, but they asked us and I thought the idea was so crazy that I accepted it because it’s a part of the change. They already held a few shows before, but they were just like acoustic shows, solo artists and so on.”

The tide was turning for concert goers as well. Four days after the show was announced, it sold out, leading to fresh worries that it could become overcrowded like the 2009 incident. Said Al Shawaf,

“on the fourth day they said the show was sold out. We cannot register anyone’s name, they have full capacity and they were actually starting to get worried. It was overwhelming. A lot of people wanted to come in that we couldn’t offer spots because I guess the organizers were worried. They were going by the book. They didn’t want to give any reason or any excuse for the show to be shut down.”

While there were a few complaints from the store next door to the venue and the building manager, the show went off pretty much without a hitch.

“They still complained and they even brought the building manager to complain,” said Al Shawaf. “But we went through the night. We cut our set a bit short, but we got away with it. It happened.”

The night brought about much praise for the band, as well as a renewed invigoration for the scene with people coming out of the woodworks just to be a part of the momentous occasion.

“It was one of the best shows we’ve ever played, like literally. A lot of people who showed were faces I haven’t seen in ages, like I haven’t seen them in over 10 years. They appeared on that day, which was really cool. It felt like everyone’s coming back. Everyone’s starting to get hopeful.”

With the encouragement the night provided, Al Shawaf says he wouldn’t be surprised if even bigger shows could come from it.

“All the organizers, all the people in the metal scene are now starting to think bigger, like they want to do bigger shows. I wouldn’t be surprised if they held an open air show. They’re really, really driven. And I think it’s going to happen, all after this show.”

“This show was like … it’s possible. We did it. Nothing happened. The world didn’t end because everyone was scared.”

Creative Waste is currently working on a new album. The band has released two previous albums, 2012’s Slaves To Conformity and 2008’s Cruelty Beyond Conception.