Megadeth struck drumming gold when Dave Mustaine announced that Lamb of God’s Chris Adler was going to play drums on Dystopia. And then when the band decided to tour in support of the album, Adler sat in with them. As solid of a pairing he as , with Lamb of God on the road as well, it was inevitable that it wouldn’t last forever, and with Megadeth starting a run of shows tonight, they’ve tapped another excellent drummer to sit behind the kit: Soilwork’s Dirk Verbeuren. Adler tells Banger TV he recommended Verbeuren, who’s drummed for Soilwork since 2005:

“Megadeth is on tour now doing a couple of festivals — same festivals that Lamb of God. “e tried as much as we could with all the promoters and all the festivals to have us coincide and play on the same day. I’ve done double duty with Lamb and Megadeth across the U.K. and just done five shows with them along this tour that we’re currently on right now, because we were able to collide and make those things happen. As we go in different reactions and play different things, Megadeth has a drummer to be able to play those shows. Dave would certainly prefer to have me there, and I love playing with those guys and I would love to be there, but obviously I cannot be in two places at once.”

He continued: “Dave asked me… He said, ‘As we’re doing this, and if you’re not able to be there… I understand you wanna fulfill your commitment with Lamb of God. And we’re planning on going over to Europe while Lamb of God is still touring. Help me find… Who would you want to drum for us?’ And I said, ‘First of all, the drum tech you currently have, Tony who was the drummer for Dimmu Borgir and Angelcorpse, [he’s an] amazing drummer, so you have someone on staff that can easily do this.’ But then he asked, ‘Well, if there was someone out there that you would personally recommend, personality-wise and playing-wise?’ And [Dirk]just began the job today.”

So far, Dave’s batting .1000 with drummers on the Dystopia cycle. We’ll see how long Verbeuren lasts or if Adler returns. 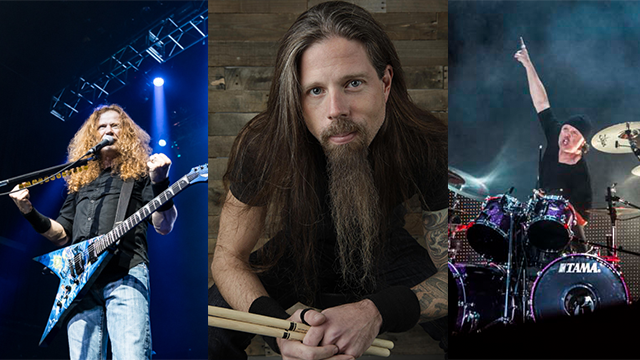