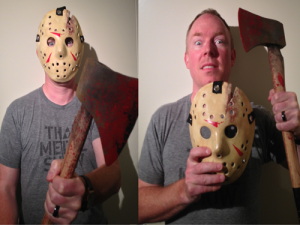 3: Friday the 13th Part 3-D
This has one of the absolute scariest Jason Vorhees scenes ever when a woman sees Jason in a barn and he runs down from the barn into the lake where she is watching him, all without his mask and looking creepy as hell! I love the cheesy 3-D scenes too where an eyeball flies at the screen and people poke stuff at the screen, so 80’s!

2: Friday the 13th Part 6: Jason Lives
I saw this one in the theater and LOVED it right from the start! How can you go wrong with Horshak from Welcome Back Kotter and a creepy graveyard! Starting right out with a maggot faced Jason Vorhees rising from the grave, this is a classic entry in the Friday the 13th series.

1: Friday the 13th Part 4: The Final Chapter
My dad took my sister and I to see this movie when it came out in 1984, I was 10 years old. It was the first film of the series that I got to see in the theater and it blew my mind! With Tom Savini doing the effects, Jason Vorhees is at his horrifying best. The end scene with his face sliding down on the machete is so freaking AWESOME! The day after I saw this movie I went to my fourth grade class and described every murder scene during show and tell. The next day after many students complained of nightmares the teacher had a new rule – No more horror movie plots described during show and tell! This is the film that I make sure to watch EVERY Friday the 13th, and with Crispin Glover AND Corey Feldman in the cast, how the hell could you go wrong?