Since the beginning, we’ve worked on giving our own unique character to a powerful and modern sound with a touch of 80s metal spirit. We wanted to continue the same power. The EP has an extend the contextual concept. Ronny, our guitarist, is the main composer. He has written the basic song structures and has a good feeling for riffs, harmonies, and hook lines. Daniel has added his ideas and his incredible guitar solos. Fox is responsible for a groovy bassline, and Nafta is our drumming killer machine, and I ‘ve created the whole concept about the album and have written the lyrics. Everyone has brought all their passion and power to this record. Til now, 2019 was very busy for us. It was a very hard first half-year under time pressure, where we have written the last songs, recorded the album, and made all the artwork concepts. In such a stressful time, it is important that we all can count on one another. Ronny has arranged and prepared all the songs for the recording session. Guitars, bass and vocals were recorded in elaborated home recording sessions. Only the drums and mixing/mastering, were done at the studio. The recording session of Vice World was an important experience for me, because I could do it completely my own way and tried new and different vocal phrasings. I haven’t done it before on records. After five hard weeks, all vocals were done, and I was very pleased with it. Now we are looking forward to the release.

The album cover is vibrant. Reminds me of a mix between vegas, a carnival and an old school pinball machine. Can you talk more about this?

As the cover implies, the album has a subdued socio-critical concept. As an artist, I think it is important to bring things in question. We are living in a society, which is shaped by egoism, consumption craze, and the stultification of the masses. Actually, we all have what we need, but the world is going crazy, nevertheless. This is what I want to express with the album cover. But we don’t want to be moralizers. The major part of the lyrical content in our songs shows the society ironically and exaggeratedly. I was inspired by the old popular board game “The Game Of Live” and wanted to demonstrate our vice world like a poster of an exciting and morbid gameshow. 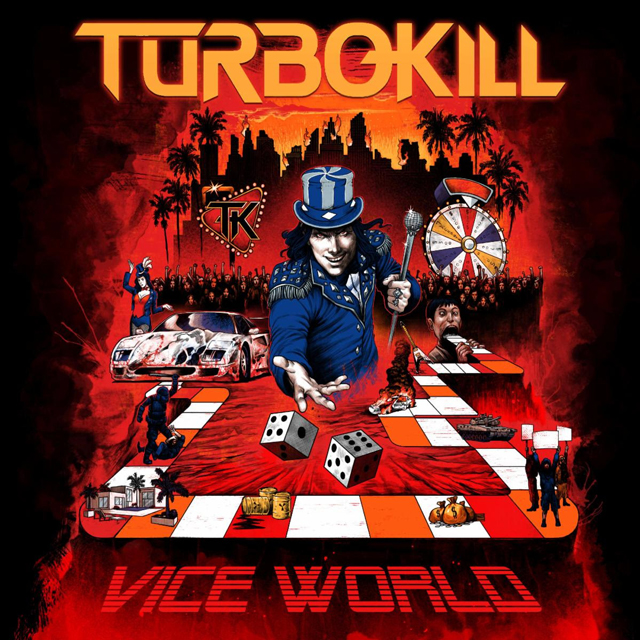 For those who are unfamiliar, can you talk a bit more about the history of Turbokill?

It all began with the vision of my own heavy metal project. I had already previously some years ago. After the break with my former band Alpha Tiger in 2015, it never was an option to stop making music. It also was a time. I needed for myself, and also it was difficult to find the right musicians for such a project. But in 2016, Ronny’s and Nafta’s former band “Ebony Wall,” wanted me for guest vocals on their new song “Nightfall” at this time. We also have made a music video. You can watch it on YouTube. After a concert, where I was invited to perform the song live with Ebony Wall, Ronny asked me if I want to make a heavy metal band with him. Because of the right chemistry on stage, which you only can feel with the right musicians, I agreed, and in spring 2017, we started to work on songs and ideas. This was the birth of TURBOKILL. Since the beginning, it was clear that we don’t want to do things by half-measures and give all our passion to this band. In the summer of the same year, lead guitarist Daniel and bassist Fox joined the band, and TURBOKILL was completed.

Can you talk more about the songs “Global Monkey Show” and “Sail With Pirates?”

Our sleazy hard rock song “Global Monkey Show” is like a TV sales show and represents stupidity and consumption craze of our society. According to the motto: Give all your money for some shit you don’t really need, and in the end, nobody cares about you. This song gave me the main idea for the cover artwork of our album.

“Sail With Pirates,” tells the story about life as a band – which adventures and challenges we meet together. We spend so much time together in the rehearsal room, on stage, on tour. I wanted to stage all these impressions to a pirate scene. The main idea came from our guitarist Ronny, which ex-girlfriend were pinched by a guy who said, “Those who are seeking an adventure, have to sail with pirates.” That’s the truth. So I’ve written a story about this sentence but with another meaning. And what should I say? The lyrics fit perfectly with the composition.

Are there any songs that were more challenging for you as an artist?

On our debut, I would say the more challenging songs are “Vice World “and “End Of Days.” Because I constantly need high power and have to ration my breathing air very precisely during the whole song. In general, I would say that Queensryche’s “Take Hold Of The Flame” is a very challenging song. The dynamics and emotions in Geoff Tate’s voice are stunning and very ambitious to perform. But I like challenges, and I’m planning to do a cover of this song on YouTube.

What plans do you have for later this year/early next?

First of all, we’re very curious on the official album release and all the reactions. We can’t estimate what will go on when our debut is unleashed to the metal world. Actually, we only have planned our record release party later this year and a few German gigs for the next year. We are working on an impressive live performance where we constantly add more show elements to make our shows special and hope to get a lot more gigs next year. Maybe a tour. We’ll see what the future brings.

Thank you for this interview. I hope I could give the readers insight into TURBOKILL. We’re happy about every new fan and supporter. Get ready for our upcoming album. I hope you will enjoy it. Stay heavy!