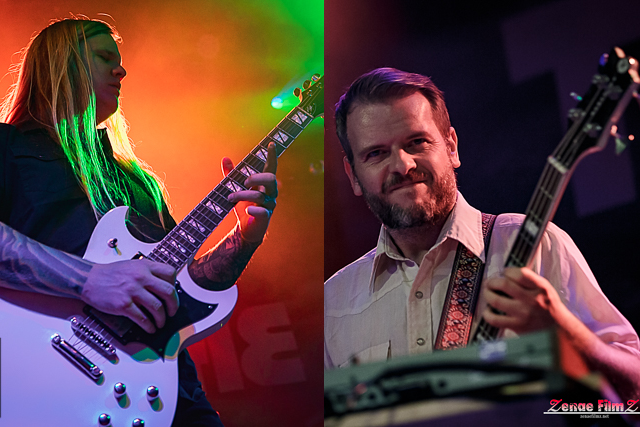 The Sword released their overall sixth studio album Used Future this past March and these Texas doom metallers have been traveling ever since to support their latest effort. We were recently at their show at NYC’s Irving Plaza and were lucky to have the chance to speak to Kyle Shutt (guitarist) and Bryan Richie (bass/synthesizers). The two discussed their favorite The Sword album, how they enjoy the simple life, their overall experience writing the new album, and more.

Used Future has more instrumental tracks than say, High Country, Can you explain why you decided to change up your style?

Bryan: I feel like it was not necessarily a change, as it was a continuation of what the groundwork that we had laid in High Country, just exploring those themes more. As far as the instrumentation of it, we had access to more stuff to play with. So there was that. I know personally speaking, there was just an array of synthesizers and electric pianos and such that Tucker had, and was kinda like, “Oh, which one of these am I gonna pull out today?” It’s so awesome.That was my experience in regards to that.

The “The Wild Sky” reminds me of an updated version of “Dying Earth,” and I wanted know if that was intentional?

Kyle:​ No. Not at all. I- I didn’t think that. It’s kinda- kind of the loud quiet loud thing that we have sort of been doin’, I guess, the minute we started with “Dying Earth”, maybe?

Kyle:​ No, that one came out of thin air. Then we- Tucker, our producer, he helped us figure out that whole middle section where it gets all keyboardy and stuff. That was a fun one.

Bryan:​ Yeah it was cool. Do you remember how, we had tried to make it for a little bit with, like, a “duh doh chicka dow”.

Bryan:​ Do you remember that?

Bryan:​ And we totally made it normal, but there was gonna be some kind of ridiculous shit that didn’t make it into the final product. We spitball a little bit on some of those, you know, but it’s some of those tracks we did together at Jimmy’s house farting around, with Kyle rocking the table and, you work from a lowercase a to a capital A and then you move on to a lowercase b and capital B..

Hearing “Dying Earth” live can be a mind blowing experience. And then when I heard “The Wild Sky,” I  thought, “Oh, wow. This is giving me that same energy as ‘Dying Earth’ did.”

Kyle: ​I think we play them back to back, don’t we?

Bryan:​ We usually do [laughter]. It’s like a double dose.

Was the writing process different for the new album than your prior efforts?

Kyle:​ Yeah. We were really kind of half baked with a lot of ideas but just nothing made it to anything, really. And, just lived and had fun. It was fun. It was a good time. This was the fastest we ever made a record.

Bryan:​ It was a great opportunity to hang in Portland for a little bit. We had done, Apocryphon in Baltimore and that was a much different experience. And it wasn’t really that nice. It was kind of  tough- it wasn’t like a tough record to make, but it was just…

Kyle:​ Baltimore is a tough city.

Bryan:​ Baltimore is a dark place. It casts a shadow, you know. But Portland is very bright and vibrant and sometimes the weather’s, a little overcast. I dig that.

Have you guys ever started thinking or working on the next album?

Kyle:​ There’s a lot of music left over and put in the folder, if you will, so, the ​ideas that we had would go in there, but, once we put a- put a record out, we just book shows, travel around, have fun.

You guys are touring until next year [laughter]…

Kyle:​ You got to put down at least six months in advance, so we do that for a while. It sort of stacks up and before you know it, two years have gone by. And then you do that six times in a row. A dozen years go by. It’s kind of weird.

What was the feeling you guys had the moment you found out you were opening for Opeth at Radio City as well as when you opened for Metallica for the first time?

Kyle:​ I always sort of put Radio City at the top.I knew there was no way we would ever have headlined there at that moment. I don’t know. If you play at our shows, over the years, after a while you sort of feel like you’ve seen it all and done it all and it’s not necessarily as, there’s no sense of wonder anymore. But every once in awhile you get to do something like play Radio City or open for Metallica and it’s pretty crazy. Those are the moments you live for.

For fun, what’s your favorite the Sword album?

Kyle:​ Yeah. We’ve been in this since the beginning and, it’s been one foot in front of the other the whole time, and now we’ve grown so much, you know?

Bryan:​ Yeah. I, like, the amount that I’ve seen Kyle grow as a guitar player. Some days it’s just about how far apart we are. We know each other pretty well. And being able to watch him grow as an artist is very fulfilling as it is all the members of the band. It’s everyone. No one’s hit any sort of glass ceiling. We all keep on keeping on.

Kyle:​ And we all trust each other so making records is really fun now. Because I’m not worried about sucking. And I just know that at the end of it, it’s going to be a good record. That’s all it is. It’s a record of that little chunk of time that people become obsessed with and won’t let it go.

I don’t think you guys can put out a bad album or song. And it’s shown since the first album Age of Winters and then seeing you guys grow and experiment with each and every effort, shows.

Bryan:​ Thank you. We try our best.

What do you guys listen to while on the road?

Kyle:​ We were jamming to some awesome gospel Sunday morning. Radio. Coming out of- where were we?- D.C.?  I don’t know. I discovered Superchunk recently. I really enjoyed them. I don’t know why I never listened to them. They’re good. Nick Knox just died of the Cramps. There’s nothing that sounds like what we do because that’s what we do. So I like listening to things that I would never even think to do. We like Wham!.

Bryan:​-we’ve been on old school R&B playlist. It’s funny how, we were going back through a lot of the late nineties or mid to late nineties stuff on the last world tour. The leg before this. And how much stuff you discounted when you were a kid that, you know, actually, in comparatively, you’re like, “Oh, shit. This is actually, like, good.”

Kyle: ​If a Backstreet Boys song comes on, I’m actually kind of stoked, dude. At least it’s not some of the new garbage you hear. I mean, I feel like that every five years because it’s just getting worse and worse. ​I don’t want to go down that road.

What are some of your hobbies outside of music?

Kyle: ​Some of us have kids so hobbies don’t exist anymore.

Bryan:​Yeah. I chucked mine long ago.

Kyle:​I used to love scuba diving. I can’t afford to anymore, but it’s a wonderful sport if you can manage to get a couple air tanks, boat, and body of water it’s really fun. I like it because it’s so quiet underwater. There’s no people. Then when you get to a place in that kind of quiet you can hear, again. I thought that really helped with getting the creative juices flowing.

Kyle:​That’s kind of relaxing doing it.

Bryan:​Yeah. It’s very calming. I love mowing the lawn. Mowing the lawn has been one of my favorite things to do since I was a teenager, actually. Once that became a thing that was an option for me to do. I was like all over it.

Kyle:​ I’m the exact opposite. I just did everything I could to get out of it. ​I did such a horrible job that I figured if it looked that bad then my dad’s pride would dictate that he just couldn’t let me do it. He would have to mow the lawn.

Kyle:​It totally worked. I did the worst job. I was kind of a shitty kid. Not really, I didn’t want to mow the lawn.That’s why my mom likes training dogs better because I didn’t do a fuckin’ thing that she wanted me to do. She’s like, “I’m gonna get dogs and they’ll do exactly what I tell them to every time.” I think certainly that’s why she got them so-

The hard rock and metal world is reeling from the sudden death of Vinnie Paul, can you guys tell me what he meant to you?

Bryan:​ Heard the news from Kyle.

Kyle:​ Yeah. Came right off stage and took out my phone to see if I had any texts, and yeah. Everybody was just Vinnie Paul. I was like, “Oh. Get the fuck out of here.” Saw Pantera when I was 14. Thought I was going to die when they started playing “Walk.” The pit was serious business back then.It was fuckin’ one of the sickest shows I’ve ever seen. It was Coal Chamber’s first tour. And Machine Head, it was on I think The More Things Change was just about to come out. So, definitely it was a good show. Pantera was fuckin’ sick. It’s just, you never know when you’re gonna go.

Anything else you guys want to mention or say to your fans?

Kyle: ​We love our fans. They’re the ones who’ve stuck by us this whole time. It’s been a long time. And I kind of can’t believe it sometimes how long it’s been, and the fact that people still come out and give a shit really just blows my mind.

Bryan:​ Yeah. It’s insane.I mean, it’s not, like, insane, cause I think we rock, you know? 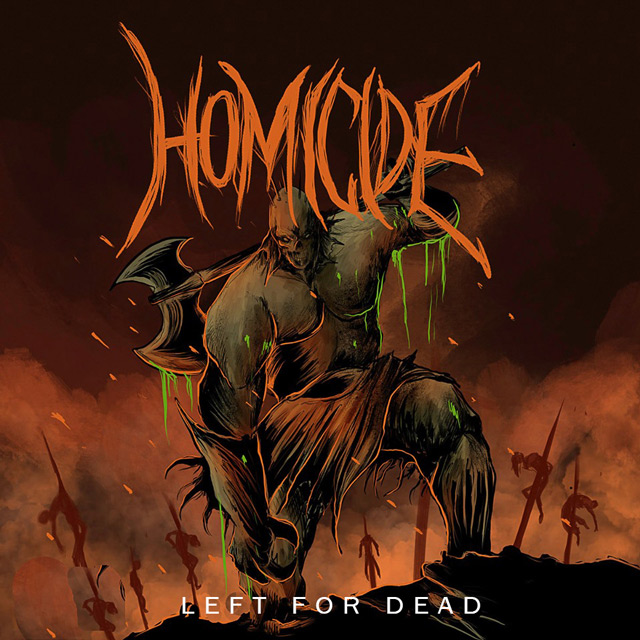