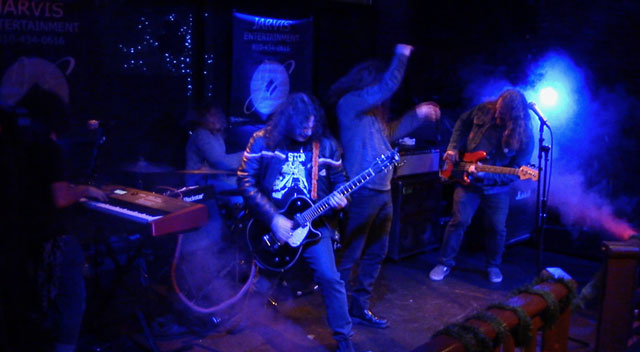 This Sunday (16th) the Stoned will be joining Warrior Soul for the final date of their tour at Lucky 13’s Saloon in Brooklyn, NY. This marks the group’s first Brooklyn performance in a decade as they are calling this show the “re-union of the re-union show!” The band originally started out as a side project for Kory Clarke of Warrior Soul as they performed at the legendary CBGB’s before it closed. We caught up with Clarke, Adam Dubin, and Scotty Dambaucher to talk more about their overall sound, formation, and their upcoming show.

The Stoned formed in 2006 in NYC as a side project for Kory Clarke of Warrior Soul. We played from 2006 to 2009 including a show at CBGB’s just before they closed. We often played support for Warrior Soul on tour. On one occasion in 2008 we tried to go the UK to support Warrior Soul and we were deported back to the US! Being a filmmaker, I made films about all of this good stuff. Our final gig turned out to be the Toronto Freedom Festival which was a marijuana legalization festival in 2009. As you can see, it worked and now marijuana is legal in Canada. The Stoned were never properly thanked for this but I guess we’re too modest to take full credit. Anyway, Kory, Scotty and I, played two reunion gigs in 2018 in Michigan. And now we are going to play a reunion gig in Brooklyn, our first Brooklyn show in 10 years. Once again we are supporting Warrior Soul and that is awesome. A lot of people seem excited about this on social media and we would like to promote the show. Please write to me and we can work out a time to speak. It would  be best to speak to Kory and Scotty is available too. Their numbers are below as well as info on the band. Warrior Soul is doing a US tour now. The Stoned are joining Warrior Soul for the final date, June 16 in Brooklyn at Lucky 13 Saloon. We call it the Re-union of the Re-union show!

Scotty: I think the sound is Super Bomb late night FM radio from the 70’s…CREEM Magazine Detroit style offerings that you crank up!

What sparked you guys to have a Stoned reunion?

Adam: A reunion of The Stoned was always inevitable, we were just waiting for the right dollar offer. Now that offer has reached a dollar so we are back together again. That’s a clear improvement over previous gigs where we made no money at all.

Scotty: It was the joint that was sparked!!!

Do you have any future plans you can reveal to us either more shows or new music?

Adam: The Stoned played two reunion gigs in 2018 in Port Huron, Michigan. Now we are playing in Brooklyn where we first started. Our gig is at Lucky 13 Saloon on June 16th. We are not so much commemorating our 2009 shows as we are commemorating the 2018 shows. So it’s more like a reunion of the reunion show. As for new music? I guess we’re not quite through with the old music yet so it’s anybody’s guess.

Scotty: New shows are on the rise!!!  Two in 2018 and already one here in 2019!!!  Let’s go. We also have The Stoned: The Musical!!! In its earliest of stages. Great concept and great timing, everything is a musical these days; and of course more The Stoned episodes!!!

What was the overall experience like for you to perform at the Toronto Freedom Festival?

Scotty: Great experience, fantastic and engaged crowd, every demographic and great hosts!!!!  Coming from the US and being involved in the Marijuana Marches in NYC, and Hash Bash in Ann Arbor, it was very refreshing to experience the Canadian vibe!  And now legalization in their country.

Depending on the state, there’s been a lot of progress on the legalization or decriminalization of Marijuana. Do you see cannabis becoming legal or at least for medicinal use throughout all fifty states at some point?

Adam: As we know, in the United States, some states have legalized marijuana while other states have not. The Stoned have a suggestion for this problem. The legal states should burn marijuana and use those giant wind farms to blow the smoke into the non-legal states giving them a contact high.

Scotty: We just voted in the legalization of recreational marijuana here in Michigan and as soon as the powers that be see the power of the people, the country will be Green!!!!!

How has the music industry change over the years for you guys?

Adam: The music industry has changed a lot since The Stoned last played. The music industry has been sucked down into a giant black hole which was predicted by Dr. Stephen Hawking. In his landmark paper “Quantum Physics, Black Holes and Music Sharing,” Dr. Hawking correctly surmised that compact discs and cassette tapes would one day be split into their lower atomic particles and disappear altogether. However his calculations were incorrect about the resurgence of vinyl but even Einstein missed from time to time.

Scotty: Live music is making a comeback with this generation and it is a pleasure to see!

Adam: The future looks bright for The Stoned. We are working with the same technology company that is currently staging the Ronnie James Dio hologram tour. They are making holograms of The Stoned so that we don’t have to tour. The Stoned hologram can tour for us. As everyone knows, The Stoned were famously deported from England in 2008 as depicted in our award winning documentary film “The Deported.” From now on we will be sending The Stoned holograms to the UK. If the hologram gets busted by the authorities then they can lock up the hologram, we don’t care! And if the holograms do make it through immigration, then let them play the gig! They’ll probably be better than us and certainly more sober. So it’s really a win-win situation.

Scotty: Looking forward to a great show in Brooklyn and again supporting the amazing Warrior Soul!!!!!! 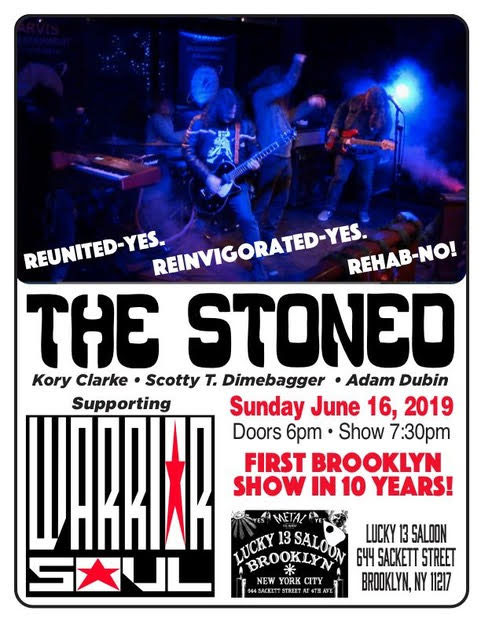 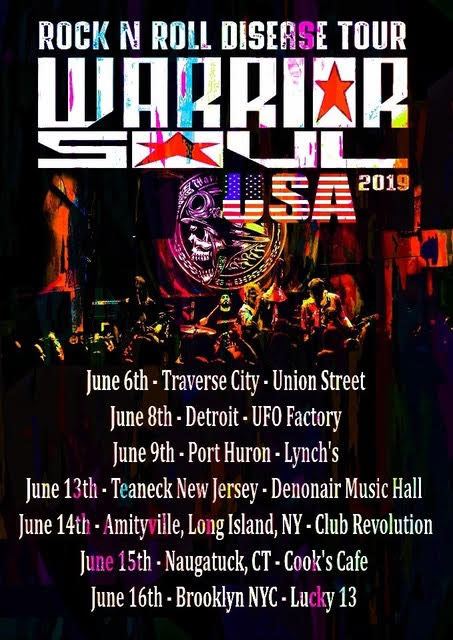