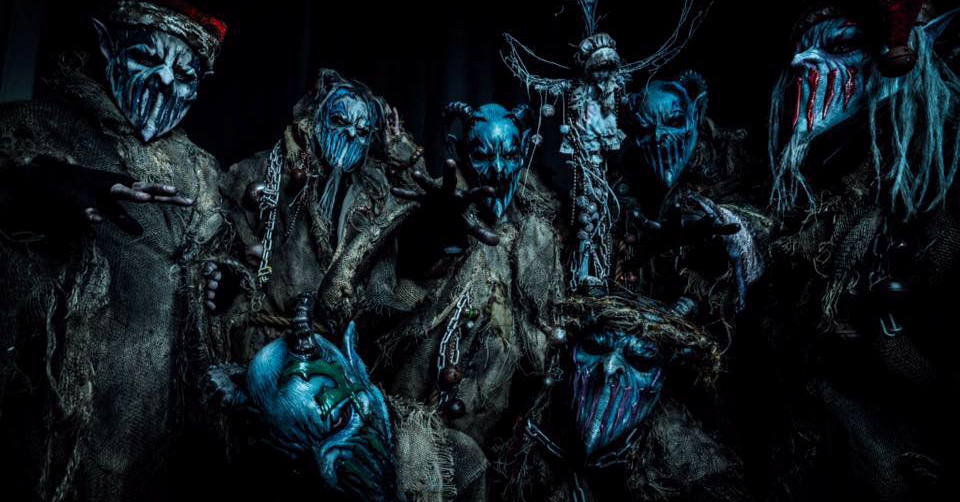 Cleveland, Ohio’s Mushroomhead have surpassed giving their fans a musical adventure as they have incorporated a unique experience with their masks and overall creative expression. It is what made their DVD’s Volume 1 (2005), and Volume 2 (2008) a success. And now, the group are on their way to release Volume III on August 17th via Megaforce Records. In celebration of their upcoming DVD arrival, the band will host an exclusive one-night-only premiere of the film in their hometown at Cedar Lee Theatre in Cleveland Heights, Ohio on August 15th. Tickets for the event can be found here, and you can pre-order the DVD at this location. Additionally, the group will headline the inaugural edition of the Summer of Screams Tour on August 17th with Powerman 5000, The Browning, Psychostick, Kissing Candice, Unsaid Fate, and more, which you can view the tour dates here.

Luckily, Mushroomhead have even more planned as we were able to catch up with Skinny (drummer) as we talked about a hopeful follow-up to 2014’s The Righteous & the Butterfly, the music industry,  lineup changes,  the process of the Volume III DVD, and more.

You guys have had a significant lineup change this year, and it must have been difficult when Jeff and Church quit. How has the ride been since, especially recruiting Steve and Tom?

It’s funny, cause Mushroomhead’s been, this year is 25 years of it, right? October 23rd, so with the member changes, we’ve been through 12 member changes all together. So (laughing), this is (laugh) ultimately nothing new to us. It’s one of those situations where it creates something of an unknown. I tend to like that when we go into writing an album. I don’t like predictability when it comes to art. So, that knowing, what we’re gonna get. I mean, when we kinda seem to be, riding along for a long time. Their friends, they’ve been fans of the band for a long time too, so they know what, to do but, like I said, it’s just kinda the unknown, so, really looking forward to it.

How are the fans taking to these changes, any significant responses especially with Steve?

Oh absolutely, I think the last tour that we did, I think more and more people are coming out just to get a glimpse of it for themselves, instead of just checking it out online. No, they really want to experience it and see how much of a difference, he’s making and adding more energy to the shows. So far the response has been great!

Awesome. How has the process been for the DVD volume 3? Is it any different than the prior 2?

Yeah, this one was treated completely different as far as the way it was put together. The last two were very similar to themselves, almost along the lines of a Pantera ‘Vulgar’ video. The first two were kinda done in that format as well. This one is done a little bit more cinematic. And when we use the live elements, it’s a little different. It’s got a lot of really dark slow-mo stuff,  live. To one aspect of it. And then we did remixes from the Righteous and the Butterfly. Not for every single song but almost every song of the album has a remix with a slow-mo piece, some live footage in it. So it’s done really well, very cinematic, very artsy.

Awesome. I also saw in a recent interview that you guys are planning to release your new album in possibly early 2019. Is there anything else you can reveal to us?

I mean, we have started. And it’s coming out great. Obviously we’re not even half way into it yet, but if everything goes on track, the world should see it by March or April of 2019. But so far so good man, the songs and ideas are coming out really fast, and not like fast upbeat, but the ideas are coming out very quickly, and it is almost writing itself. (laughing)

Awesome. And speaking about the music videos on the DVD, Mushroomhead definitely have some entertaining videos. I really like the Evil Dead inspired video for We Are the Truth. If you could, which album would you make a horror film out of?

You know, that’s a tough question. I probably have to go to the fourth record, which would be XIII off of Universal back in 2003 when we put it out. That’s still one of my favorite albums to date and it offers a lot. There’s a lot of really dark textures all over it and I think that would make a really good one. Actually, I should back that up. This new album that we’re doing, I wannado a whole DVD for it. I wanna make, basically, a Mushroomhead version of (Pink Floyd’s) The Wall. That’s what I want to do.

Well that would be awesome.

We need more of those videos too, would make people buy DVDs again.

Right? Wouldn’t that be fun?

We’re actually doing a premiere for the DVD in Cedar Lee Theatre here in Cleveland on August 15, there’s only two showings. One’s for cast and crew and then the other one’s for the public. Again Cedar Lee Theatre, August 15th. It’s gonna be really cool to watch the DVD finally on the big screen, instead of having to work it on the computer, multiple computers for the last 3 years. To be able to sit back and watch it in the theater, that’s awesome.

There’s definitely a difference between the television and the big screen.

Sounds great. What are you looking forward to the most on the Summer of Screams tour?

You know, this is going to be fun. I always enjoy being on a tour that’s not specifically ours. Yeah sure, we’re the main headliners for the tour but, it’s more of a festival style thing. The line up is great. The bands that are on it, a lot of them we’ve toured with before so it’s kinda gonna be like a high school reunion. Bunch of grown up kids out there, it’s gonna be a lot of fun. Great bands too – Powerman 5000, Psychostick, The Browning, Kissing Candice, Unsaid Fate, us, a few others too. I know the lineup just recently changed, but, we really enjoy doing more of a festival style tours, where there’s multiple bands playing. And like I said, it’s not just our tour and our show, so it’ll be fun to watch the other bands all day long.

​It’s cool, because those are the type of tours where you get a good sense of comradery, sharing gear and just doing a lot of fun stuff, really looking forward to it.

Awesome. What music do you plan on bringing while on the road?

As far as playing? Or working on? Because we’ve got some mobile rigs to do some recording while out on the road. We’re gonna be working on the album the entire time that we’re out there.

Yeah, it’s fun to be able to edit scratch vocals. Just get ideas, in the back of the bus or in a dressing room. So, we’re definitely gonna be working the whole time we’re out there.

That’s good. How has the music industry changed for you over the years?

You know, it’s definitely been tough over the last 25 years. The biggest thing is the file formats. Cassettes go away, watching CD’s go away, if you can imagine how the technology’s been going online and still some of the labels don’t have all the titles for Spotify, things of that nature. You gotta adapt and go with it and embrace the whole digital format, I think it’s great because, you don’t have the issues you do with this product as far as, shelf space and damaged items and returned items and things of that nature. I mean, it’s literally all right in a cloud, right now. How convenient it’s become. Even the old folks go to iTunes and download an album just like that. Or even briefly check it out. Same thing with YouTube.

​And you know, in a lot of ways it’s Internet, but it’s really helped, at least, here now, for bands to get a little bit of success it’s obviously very difficult for them. You know, a band to become huge, overnight. But I think it’s allowed a lot of bands to have just a little bit of success and get their product out there. When I started, there was no Internet. There was no YouTube. (laughing) We were still faxing things and waiting for things in the mail. It’s been a hell of a ride, I’m just glad we are able to continue working and be able to take advantage of some of this technology.

It does give people a chance to expose themselves. For better or for worse.

What does it feel like being at this point in your career to not be with the same members you started out with?

Well again, it’s one of those situations where, it’s been evolving the whole time. It’s just the natural process of this band. I think a lot of people look at bands, especially people that aren’t in bands, they look at it as, all of these marriages, it’s the Beatles and we have to be these four people that make up the band and it can never be anything else. I don’t really think of it that way. No, it’s more of an artist community than it is, a handful of rock stars thrown in a room. With that being said, we also have an open door policy too. People leave and come back. I mean J Mann was gone for 10 years and came back. And now, he’s back to be a permanent member again.

I never really see anything as over and we never set out to do the same thing with the same people. Like I said, it’s just been an evolution and I think it’s grown into something bigger than any one single member. So it’s really cool when you look at it that way. Then if it’s kind of, outgrown all of us. It’s bigger than any one of us.

That’s a very good perspective. Very true and I think over the years, there have been bands out there that have changed multiple singers in their career or even disbanded, but you guys have stuck together for so long, there have bands that have formed and broken up during the course of Mushroomhead’s career.

​Right. I have to say the masks has helped. Someone compared us to the cross between a heavy metal band and Mortal Kombat. I said, you know, that’s pretty good!

Just because there’s so much anonymity to it when there is a band and then it’s based on a character. The characters go and come back, come back with different outfits or masks or costumes and yet people like these changes and these slight upgrades. So it’s definitely an interesting thing. And, I think that the masks definitely helped longevity.

Yeah, well don’t give up the masks, ever! (laughing)

No, no absolutely not. That was part of the fun that I mentioned. The majority of us are pretty hard core and to the art. Myself, I’m very addicted to just the creation of things. Whether it’s the mask, the music, the art, or the videos, whatever. And I like just having an idea and actually turning it into a product or something sustainable that’s a substance versus opinion.

Is there anything else you want to say to your fans?

​Obviously thank you for all the years of support and the DVD drops August 17th and the Summer of Screams Tour starts the exact same day so, when it comes to a city near you, please come and check us out!