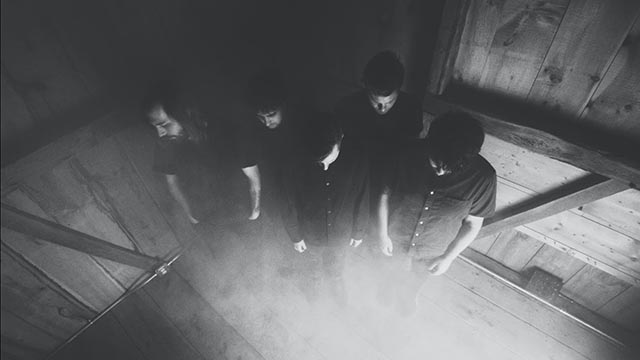 Philadelphia blackgaze outfit The Drowned God are gearing up for their new album, Pale Home, out this Friday (26th) via Solid State Records (pre-order here). We asked bassist Brandon Baun to share five things he learned recording the new album during a pandemic.

01) We recorded our new album “Pale Home” in early June of 2020, after the studio dates had already been delayed once due to the pandemic. Our first week recording at Machines With Magnets was the same week that protests were really taking off around the country, which led to a curfew going into effect. With everything going on in the world at that time, it felt natural to be hunkered down with my best friends and creating a record. I think a lot of that angst and anxiety we felt can be heard in the album we made. From this experience, I was reaffirmed that tough circumstances and setbacks can ultimately be a boon for catharsis through expression

02) The Drowned God has always been a pretty deliberate band. On our new record, we wanted to push ourselves and be more spontaneous in how we approached the music. We came into the studio with 9 songs written, and one with only a drum and synthesizer loop that Lucas had come up with. We spent one night in the studio working as a band on potential directions to take the song and the next morning I woke up super early to write the bass and some guitar parts that were recorded that afternoon. We definitely felt the time crunch to create something worthwhile and I think that feeling paid off. The end result is the song “Gnashing of Teeth.” I’m super proud of what we created that day and learned that putting some tight deadlines on yourself (can) lead to something unexpected and different, at least for us.

03) We spent a ton of time stuck inside during the weeks we were recording the album. Unable to go anywhere or really leave the studio, we immersed ourselves in the realization of “Pale Home.” Our nights usually revolved around demoing out material that would be recorded the next day and playing (too much) ping pong. I think we started to get a bit delirious. From this experience I learned the importance of levity and taking time to unwind.

04) Our drummer, Dan lives in New York City while the rest of us live in the greater Philadelphia area. It can be hard sometimes to get together during a pandemic, which is why we’ve all invested in recording gear on our own to make it easier to quickly share and build upon each other’s ideas. Since I don’t think there will be live shows happening any time in the foreseeable future, this is really the time to get as many ideas down as possible. I’m looking forward to seeing how this new process is going to influence the direction of our sound in the future. From this, I’ve learned to be open to as many avenues of creative expression as possible. Good ideas can come from anywhere.

05) Despite everything going on the world in 2020 when we were recording our new album, I had an absolute blast spending weeks locked in a building with my best friends. At this point we’ve been friends for years and we all view the band with a similar outlook and are all equally committed to the long-term growth of The Drowned God. I think it’s a really sustainable model for long-term creative output. We’re all at a really intuitive level creatively at this point and I look forward to how this will continue to develop in the future. I think that it’s so important to connect emotionally with the people you’re creating art with, and this was definitely reaffirmed while recording “Pale Home.”