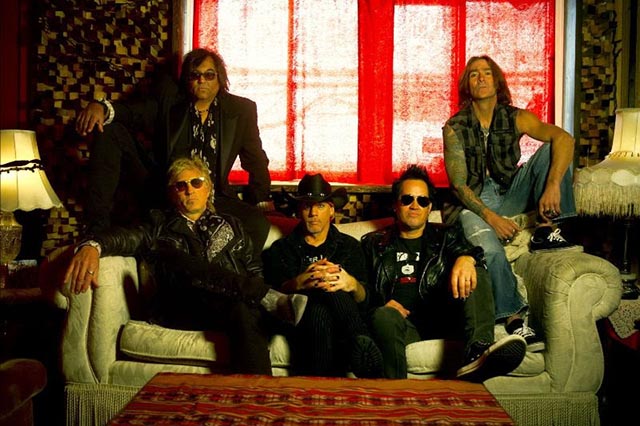 Vancouver’s glam-punk outfit Dirtbag Republic were forced to put their new album, Tear Down Your Idols, on hold during the beginning of the pandemic. With delays and uncertainty, the group continued to forge on as the days of the COVID-19 uncertainty remain. We caught up with the band as they shared their overall pandemic experience.

It’s March 10th, 2020; we had just completed our third album, Tear Down Your Idols, and received the final masters from Harry Hess (Harem Scarem). The record exceeded our expectations, and we were stoked to get the new album out later in the year.

We’d be talking to a few labels that had an interest in putting out our new record, and one label, in particular, was quite excited about it, so we kept that door open as things progressed. That same month we heard all sorts of things coming out about some plague-like flu coming out of Asia, but it seemed like it was isolated and nothing to worry about on the west coast of Canada.

We had also been rehearsing as a full band for several months and were on the cusp of being ready to start doing some club shows. Then everything came to a screeching halt!

It seemed like in a span of a month or so, our rehearsal place and the places we were working at shut down or did the work from home thing. In Vancouver, there were issues with homeless people downtown, so we decided to do a charity song to raise money for one of the larger food banks in the city. We wrote the song fairly quickly, and it was modeled a bit after Sometime Salvation by the Black Crowes. I called it Pandemic Blues, and it talked about what was going in the world and kind of about the unknown with this whole Covid thing. The song came out well, and Mick and Feds did some killer trade-off leads. We raised about $1200 for the homeless shelter.

One thing we’ve done since our inception in 2015 is to keep on writing music, regardless of what’s going on. So, Mick and I forged on and kept writing new music, so many in fact that we have the whole next album written before the 3rd album is even released.

In July, our rehearsal place opened back up briefly, and we got in a few jams before it was shut down again due to Government restrictions.

In August 2020, we signed a deal with Shock Records to put out Tear Down Your Idols on CD/LP. We jointly decided to delay the album until early 2021 as people were struggling financially and felt we wouldn’t be able to promote it with all the crazy stuff going on.

On our last record in 2017, “Downtown Eastside,” we never got around to making some good music videos, only a lyric video for the song Junkie Girl and that’s about it. We wanted to do some proper videos, so we reached out to some local video directors and got a major score with Matt Leaf, who agreed to sign on for the Wannabees video, which was our first single. Matt had done some videos for bands with top 10 singles in Canada and was nominated for MMVA’s. So, we did our first video in October and held onto it until the album’s release.

In November 2020, we enlisted Andrew Cairns of MakeItCount Media to do the CD/LP layout. We submitted everything to Shock Records once everything was completed in December, sending everything to a plant in Europe.

We decided to release the album in April 2021; at least, that was the plan. Unfortunately, the huge insurgence of vinyl popularity, covid messing up production timelines, and shipping limitations from Europe to the USA have caused a large delay with the album.

We released our first single and video Wannabees on January 7th, and it premiered on Sleazeroxx and got overwhelmingly positive reviews and feedback. The ball was rolling for the record to come out, and then April hit, no album, May, June, July hit, and no album. This was highly frustrating as it derailed our momentum from the first single, but we could do nothing about it. It’s now July 26th as I’m writing this, and our record is somewhere in transit. We found out it was stuck with many other VMG products in Belgium for a month and a half!

We thought we needed to forge on during those delays and have another video done when we finally got the records in hand. So, we picked a ballsy rocker off the album called “Days Are Gone” and enlisted Matt Leaf to direct once again. We rented out a large venue called the Rickshaw Theatre and did a high-energy performance video that turned out great. We are holding off releasing it until the albums have safely made it to our label, and we can get a restart on this whole thing.

The most frustrating thing about this is not getting together to jam with the guys; that’s what we love to do. The other thing is we feel we have made our best album to date and have had so many people asking us, “WHEN IS IT COMING OUT!” We’re hopeful we’ll have the records shortly, and we just booked our first rehearsal in over a year for August and can’t be happier to get back at it and hopefully start doing shows in the fall and promoting our long overdue record.