After two decades of following the industry’s structure, New York punk rockers Bayside decided to do something different with their eighth overall offering. The band announced their new album, Interrobang, just two weeks before the record arrived on October 4th via Hopeless Records (order here). Next month, the group will embark on an extensive tour to support their record as the band has welcomed unsigned, non-touring bands to submit themselves for the opportunity to open at their local show date. We caught up with vocalist/guitarist Anthony Raneri on their new album, the upcoming tour, the Long Island punk scene, and more.

What made you guys decide on announcing Interrobang just a few weeks before the release date?

We wanted to try something different. I don’t like the two months or more roll-out that we’ve been doing our whole career. I’m not a big fan, I feel like people are really excited when you first announce your record, and then you spend months trying to hold their attention. Especially in the modern music industry, people move on so quickly. I was like, why don’t we give them the record right when they’re excited about it, instead of trying to keep their attention for two months. It’s definitely a little risky, but it’s something that we’re trying out. I only know about people as big as Beyoncé trying things like that. So, we’ll see how it goes for our band, I guess. 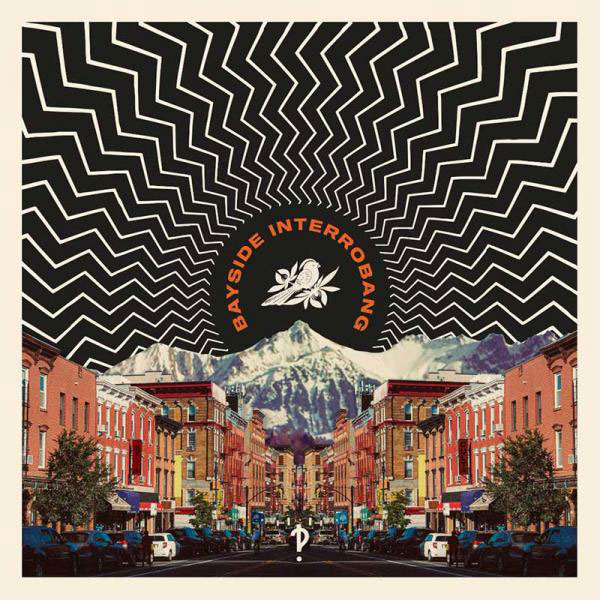 What was the process like to create the new album?

It was awesome. We took a long time working on the record. We started writing it maybe two years ago and started coming up with ideas, and we talked a lot about what kind of record we want to make and what direction we want to go. We just spent around two years working on the songs, and we would demo the songs and live with them for a few months. We’d think about things to change about them, think about ways to make them better and more interesting, go back in and shake them up a little. By the time we got into the studio, everybody pretty much knew exactly what was going to go on. We got to spend a lot of time pre-recording, focusing on the songs.

How would you compare it to your prior efforts?

What made you pick “Prayers,” to be the first single?

We found we want to keep it fresh and shake things up. As I said, it’s really important to us to sound like Bayside, but one of the things we wanted to do to change up a little bit on this record was to get a lot riffier. The metal influence has always been there in our music, but with this record, we decided that we wanted to lean into that influence a little bit more. We wanted to make it heavier, more aggressive, riskier.

And that’s what you did with “Prayers” because it does sound a bit heavier.

Yeah, “Prayers” is a good example of going heavier for sure. But every song revolves around a riff. I mean, Interrobang revolves a little bit more of an ’80s kind of glam rock riff. “Bury Me” is a thrash, real thrashy kind of old Metallica is what we were going for, real syncopated thrashy guitars. I’d say every song starts with a riff.

I believe that you guys have a tour coming up later this fall, and I read you’re offering a Battle of the Bands contest for the opening act. Can you elaborate on this?

When we were started our band, we were just a local band in New York. You kind of hit these ruts where you feel like you’re not progressing, that people aren’t paying attention, that you’re not going anywhere. It could feel like you’re spinning your wheels sometimes, and what kept us going would be moments of getting stoked. We’d get to play an excellent show, or we’d get a good reaction from an audience. And then it tells you that things are moving in the right direction and we wanted to be able to do that for 30 different bands around the country. Give them a night, a well-attended show to play. And local bands, a lot of the time, you’re playing to not a lot of people. So, it’s a good way for a local band to play in front of a room full of people. Which is a lot to try to give back to the local communities, it’s been a long time since we were in that position.

But it’s also exciting for us to see who wins every day. We didn’t put any limits on the genre or anything. We don’t choose the winners; it’s all fan voting. All the bands that enter are going to go on our website with links to their music. Then their fans and our fans can vote for who they want to see. The only rules are that it’s got to be an unsigned band and it’s got to be a band that’s not tourists, so it’s true local bands. And like I said, there are no rules as far as the genre goes. So we’re excited at the idea that we get to see 30 different bands and every day is going to be an adventure for us. There could be metal bands; there could be reggae bands, there could be ska bands, there could be cover bands. I have no idea; I don’t know what to expect.

I think it’s an excellent idea. People do need to step up and support the local music scene, regardless of the genre.

Absolutely. This whole contest is going to live on our website for all of our fans to see. I told our fans, go onto the contest page and look at the date, all these for your city and listen to all the bands, you might find your new favorite band who’s right in your backyard that you’ve never heard of before.

That’s very cool. And, in your opinion, how has the New York punk, pop-punk scene changed within the last 20 years?

Pre-20 years ago, punk was a lot of attitude. And then, 20 years ago or so, the pop sensibilities started forming, it existed before that with Bad Religion and NOFX and stuff. But, I think bands like New Found Glory, Good Charlotte and stuff like that is where the kind of pop and punk started marrying. Now, it’s funny because I see it going back to more attitude than anything. I hear these young bands that are almost their throwbacks to emo that I grew up on or the punk stuff that I grew up on and less attention to pop sensibilities, which I think is interesting.

The whole New York scene is continuously changing. We’ve seen all of these iconic venues like CBGBs, Roseland Ballroom, etc. leave. PlayStation Theater is about to close as well. We’ve witnessed all of these excellent clubs close down, and while there are still some good venues left, I was curious, do you think these changes is what’s also causing the change in the general New York music scene?

I think so for sure. I think that the music industry at large is changing. The New York scene and every other scene in the world because there are so many more bands now. And with the internet, that is the chosen route to try to get your music out there. It’s not like the way we came up or bands before us certainly where you played the circuit. We used to play in New York all the time. We used to play on Long Island all the time. That was our way of trying to find fans.

Now, people try to find fans by staying at home. It’s a waste of time to play at a local club to 10 people. Your time is probably better spent sitting at home and trying to add more followers on Instagram. That’s worldwide that’s changing. Also, you don’t necessarily need labels. It’s a lot easier for people to self-release music. A lot of it is happening on the internet now. We used to play in stores all the time. We played Tower Records in Manhattan. We did Looney Tunes on Long Island. Thank God Looney Tunes still exists.

Those are starting to go away too, so it’s having to leave your house and play shows and do in stores. Even the press is beginning to disappear. There’s hardly any print magazines anymore for rock music. So yeah, I think what’s happening in New York, it’s a microcosm of what’s happening worldwide. With that said, though, the lack of clubs. I mean, when we were starting clubs in Manhattan wouldn’t book bands like us. We could get the odd show once in a while. But other than that, they weren’t booking punk bands and pop-punk bands and emo bands at the clubs in Manhattan. Our scene grew on Long Island.

Our scene grew. I mean, us and Taking Back Sunday, Brand New and Glassjaw, we realized all of us came up playing VFW halls on Long Island because the Manhattan clubs wouldn’t book us. So now that the Manhattan clubs are going away, I think that’s what’s going to happen. I think this counter-scene always has, whether it’s punk or metal, ska, any of these subculture scenes, they always form where you least expect them. Like Seattle or Long Island, they don’t happen in Manhattan. They don’t happen in LA. They don’t happen in Chicago. They happen where you least expect them.

I remember twenty years ago or so when the Hardcore, punk, emo, all of that stuff blew up out on Long Island. I remember seeing Glassjaw perform at a small club on Long Island before they got big.

And I think that’s going to happen again. There’s the same thing as Seattle. When Seattle got big, Seattle wasn’t on anybody’s radar in the early ’90s. But they did their own thing just like we all did our own thing on Long Island because Manhattan didn’t exist as far as we were concerned. I guess to answer your question, with all those clubs closing down, I think it’s just going to happen somewhere else. The kids are going to find a place to play; they always have.

We’re going to do this as long as people want to hear us do it, and we hope that the fans take away from this record that we’ve maintained our sound, and we’ve kept up our reputation of being consistent. But we also want it to be an exciting record. We want it to feel like something new and fresh. I think that’s what people are going to take away from it.