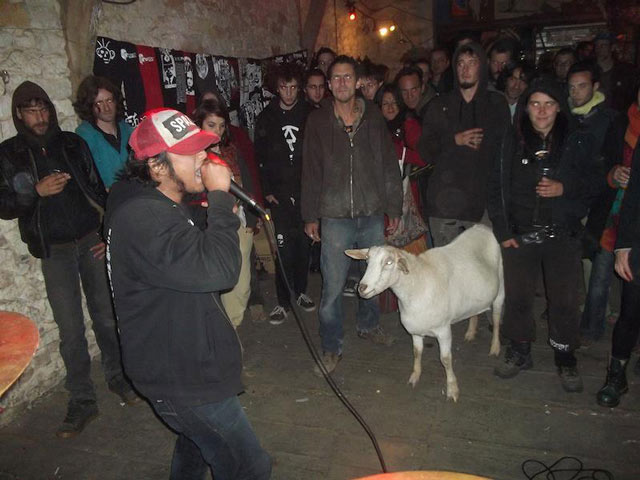 We see a lot of things come across our desks, but the goat in the front row of a Wormrot show that’s been kicking around the internet for a few years is one of the best images in metal. Now, thanks to the team over at Noisey, we not only know that the goat had a name, Biquette, but sadly, that Biquette is no longer with us, having passed away last month. The site got in touch with Flo, who helped put on shows at a farm/DIY venue in Mauriac, France, which is where Biquette lived and died.

Biquette, which is actually French for “goat,” was 10 years old, according to Flo. She’d spent the first half of her life in a milking factory, and was then handed over to the farm, where she immediately started to hang out at the shows. “Seeing as the barn floor where we throw the concerts is wooden, I think that she felt the vibrations in her hooves,” Flo said. Flo added that the goat really enjoyed any settings with lots of people, and would hang out whenever there was a gathering. In another article for Pigeons and Planes, Wormrot’s manager said that Biquette was very tame, and followed the Maylaysian grindcore band around like a dog. “When it was Wormrot’s turn to play, the goat suddenly went in front of the crowd and watched them play the whole set,” Azean Rot said. “It was just chilling around the corner when other bands were playing.”

And grindcore wasn’t Biquette’s only vice. Flo told Noisey that she loved tobacco and alcohol, which might have even contributed to her early demise. While they obviously wouldn’t feed the goat that stuff, she would eat cigarette butts from ashtrays and even try to take lit cigarettes from people smoking.  And she would try to consume paint and oil as well. However, Flo thinks Biquette might have passed away from a complete cleaning of the farm, along with a regime change of people. But apparently, she should have lived for another ten years. Rest In Peace, Biquette. You lived as you died – the most metal goat ever. If you want to leave your condolences, you can do it on Biguette’s Facebook page. Yes, the goat had a Facebook page.