This was my second time seeing a festival at USF (the first being the amazing Blekkmetal). Formerly a high-volume sardine factory, the venue now can hold well over 1,000 people for a concert. The building by the water with breathtaking views has been expertly reconfigured for live music and features impressive site lines and fantastic acoustics. The venue also features a movie theatre. Blekkmetal, the movie was shown during twice throughout the festival to large enthusiastic audiences. This documentary covered the one-time-only black metal and tattoo event created by Jannicke Wiese-Hansen and Kirsti Rosseland. Both veterans of the Bergen black metal scene, and there from the very beginning, they created a deliberately intimate event to share the love of the very unique Bergen metal scene. Jannicke, of course, is a world-famous tattoo artist who currently boasts a waiting list that currently runs one and a half years. She’s also known for creating two of the most iconic Burzum record covers and Hoest’s Der Todesking tattoo. (Hoest, by the way was in attendance at Beyond the Gates, no doubt gearing up for his upcoming EP release next month).

Blekkmetal, produced by noted filmmaker and metal video director David Hall and Concordia Professor (and one of my research partners) Vivek Venkatesh, along with fellow academics Jason Wallin and Owen Chapman, featured live performances from Gaahl’s Wyrd, Taake, Helheim and many others. Particularly exciting for the Bergen crowd was the footage from Enslaved, who performed a special “early years” set for the event. Viewers were treated to an up close and personal experience with Grutle’s growls right in front of their faces. Adding to the experience was a sneak preview of the new Enslaved documentary that the same filmmakers are currently working on.

Enslaved, of course, headlined the third night of Beyond the Gates and did a special performance of their very first LP, Vikingligr Veldi. If you haven’t seen them yet, or heard through the grapevine, Enslaved is one of the very best live extreme metal bands out there today. Many would argue that they are the best in terms of their live sound, and the band’s soundman is widely regarded as one of the greatest out there across the globe. From my own experience, seeing Enslaved countless times now in both Europe and North America, I would have to agree. It’s difficult for me to think of a band that performs better live, and has done so well for so long. Of course, the fact that the musicianship of everyone in the band is so strong, it’s not surprising that they really bring it to every one of their shows no matter if they’re the headliner or the opener.

This particular show in Bergen was the first I’ve seen with their new keyboard player and vocalist Hakon Vinje. The significance of keys and synths is not lost here. Keep in mind that Enslaved was one of the very first black metal bands to introduce those instruments to their music in the early 1990’s. In fact, they certainly caught some flack for their integration of synths, yet it was clearly and quickly copied by so many other black metal bands – especially the ones a few hours to the east in Oslo. Vikingligr Veldi, of course, caught Euronymous’ ear and the record was released on his Deathlike Silence label (Anti-Mosh 008). Unfortunately, we all know what happened to Euronymous between the time he signed Enslaved and the record’s release. With Euronymous’ death at the hands of Varg Vikernes, band members Trym Torson, Ivar Bjornson and Grutle Kjellson dedicated the record to him.

It is difficult to believe that Vikingligr Veldi was released over 20 years ago, but here we are. While the original recording was raw and featured the rather lo-fi sound we’re all accustomed to from early 1990’s black metal, the band really put together some amazing orchestration and arranging for the live performance.  Of course, the addition of Ice Dale on guitar helps, as does the two plus decades of Grutle and Ivar honing their craft.

Right from the get-go Enslaved opened with the unmistakable sound of synths from “Lifandi lif undir hamri” and the crowd quickly filled the room. The venue was packed for Enslaved’s set and they were clearly pumped just having heard Denner/Sherman cover four Mercyful Fate songs. A great transition from first wave to second wave black metal. Many in the crowd were mouthing every word – even though the lyrics to those songs classic Enslaved tracks are actually sung in Icelandic and “old” Norwegian. The highlight of the set was the remarkable “Vetrarnott,” which is just am incredibly fun song to hear live. The enthusiasm from the band was palpable and clear from their faces. Ice Dale, who is always exciting to watch live, brought some fire to the cold northern kingdom and traded giant grins and enthusiastic exclamations with Grutle on the bass. Grutle, who came to sound check wearing his trademark New York Rangers shirt (Let’s Go Rangers!) again showed us all how it’s done. His intensity is contagious and the crowd loves him – heck – everyone in the Norwegian scene loves him.

Enslaved doesn’t really need a fancy stage show. You want to watch the five of them actually perform for their entire set. They are the show and it’s difficult not to love the band after you’ve seen them. That being said, the cold blue and arctic-inspired lighting really set the mood for the show just great lighting did for Mayhem the night before.

Ivar, of course, mesmerized the crowd with his guitar work. He plays so quickly and so technically and delivers these complex pieces of music with what appears to be relative ease.  Ivar on stage is confident yet not overly gregarious. Poised and likeable.  It’s no surprise that Enslaved’s fans love him. But Ivar and company’s dedication to both composing and composure is one of the paramount reasons these friends from Western Norway have been a successful metal band for so long. In short, what we all experienced was another iconic performance from one of Norway’s most iconic and historically important musical acts.

Immediately prior to Enslaved’s headlining performance was Denner/Shermann in their first performance in Norway. This band, if you haven’t heard, features the famous guitar duo of Michael Denner and Hank Shermann. Yes, the two guys who played on the early Mercyful Fate records with none other than King Diamond himself. Fate, of course, reformed in the 1990’s to give us some great new music and, in their later albums, featured Snowy Shaw on drums. Shaw is back on Denner/Shermann’s studio work but did not appear at the Bergen show.

Bass is more than aptly handled by long time American workhorse Marc Grabowski.  Rounding out the band is Sean Peck on lead vocals. Let’s give Peck some immense credit here. While he is known for his great work and dynamic range with SoCal’s Cage and Deathdealer, you can’t sing on stage between Denner and Shermann without being compared to the King himself. And let’s not even attempt to get into any comparisons. There is only one King Diamond and we will all love him forever. With that, we have to give Sean major props for just stepping into that particular situation. Here’s the thing though – Sean Peck is pretty damn good! Smartly, he doesn’t try to be King Diamond when singing the Fate songs, yet he still hits the high notes and really gets the phrasing down from the album mixes. Adding to that, he’s an extremely likable guy who’s paid his dues in the metal scene for decades. He’s upbeat and full of energy. He’s also not afraid to show the fact that he’s a fan of Denner/Shermann and the entire experience – filming the dueling axemen (and the crowd) with his Go Pro during the performance.

So I will admit I made sure I had a space against the rail in front of Shermann for the performance. No way I was going to miss the mini-set of Fate songs in between some of original work  They did “Curse of the Pharaohs,” “Evil,” “Into the Coven” and “Black Funeral,” much to the overwhelming delight of the crowd. The crowd approving liked the new material as well, mostly because it doesn’t steer too far away from the Mercyful Fate material.

Similar to Enslaved, it was so clear that the band members were legitimately having a great time performing for the crowd. No matter how serious the song, Michael Denner couldn’t remove the great big smile from his face and Hank was having a great time being in front of a crowd again who could really appreciate his mark on the black metal world.  All in all, Day Three gave the crowd another exciting night in beautiful Bergen by the sea.  Tickets are already on sale for 2018’s festival which will feature Bolzer and Mysticum.

Tags: Beyond the Gates, Denner/Shermann, Enslaved 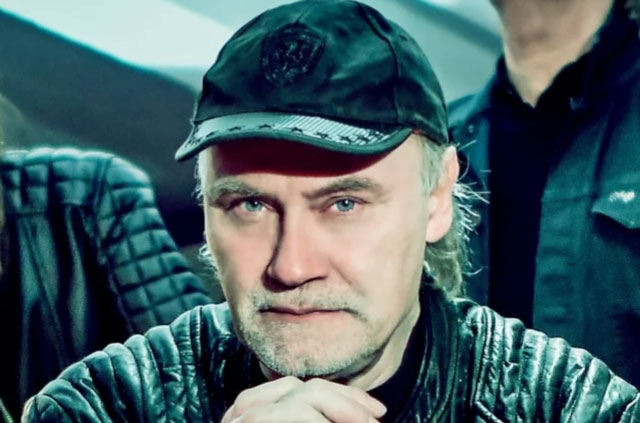