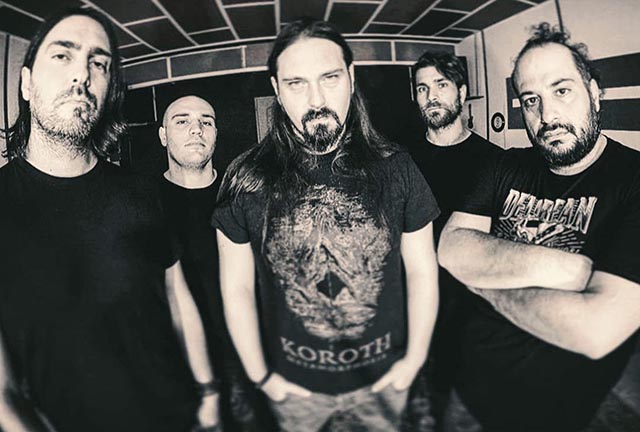 Metal Inside(r) Home Quarantine is Metal Insider’s new column during this time of isolation due to the COVID-19 pandemic. We asked artists five questions on what’s been keeping them busy ranging from their favorite movies, food they’ve been eating, music they’ve been listening to and more. We caught up with Reality Grey’s Anto Addabbo as he’s been spending this time working on their new album, Beneath This Crown, out May 7th via Blood Blast Distribution, powered by Nuclear Blast.

We have been quite busy during this past year preparing the record and the release. A lot happened, we got a new deal and new management. After all, we can’t really complain, the band is more alive than ever.

Yes, I’ve been listening to a lot of this Swedish melodic metal band called Eclipse, I love them! Old fashioned and modern at the same time, and they write great songs.

I have to be honest, I’m Italian but I don’t know much about cooking, I’m a better eater. I was in Los Angeles up until March 2020 and I had to get back in a hurry due to the pandemic. When my girlfriend and I arrived in Italy we found the nation in a strict lockdown, we stayed at home for 1 month, maybe more so we had to do something. I’ve been helping my girlfriend, she makes the best homemade bread in the world! I can oversee the process to be sure that every step is taken properly! Just kidding, she’s great at cooking I will never match.

I’ve been watching Netflix and Prime. I’m more of a movie guy instead of a TV series guy, but I really loved “Dark”, “Fargo” and “The Mandalorian”. I like audiobooks, lately, I’ve been listening to sci-fI/dystopian books like 1960 “The Status Civilization” by Robert Sheckley and 1976 “The Rebellers” by Jane Roberts. I’m also a huge gamer, I’ve played Red Dead Redemption 2 (both single and online), The Forest, Stranded Deep and currently enjoying Cyberpunk 2007.

Try to focus on something positive, do exercise at home, play an instrument, write something, don’t get sucked into social media bullshit.