KK’s Priest, the group, comprised of former Judas Priest guitarist KK Downing and former vocalist Tim “Ripper” Owens, surprised us with a video yesterday (12) for the brand new song “Hellfire Thunderbolt.” The track is taken from the band’s upcoming debut album, Sermons of the Sinner, out August 20th via Explorer1 Music Group/EX1 Records (pre-order here). The Metal Insider team decided to have a Headbangers Brawl to discuss what we really think about the new single.

Jeff Podoshen: So KK Downing is back with new music at nearly 70 years old. It’s obvious retirement didn’t work for him and that’s ok. I can’t fault him for naming his new band KK’s Priest either, because, let’s face it, he’s an essential part of the Priest DNA. The first track that’s released here sounds exactly like classic Judas Priest, perhaps too well. There are some things I really like about the song, for example the prototypical harmonized guitars and purely KK solo.  I also love the bridge and Ripper’s vocals over it. Frankly, I more greatly enjoyed seeing KK back in the saddle with his guitar than I thought I would after the years of gossip on the internets. I’m glad he’s able to get back to what he was born to do and I certainly do have an interest in hearing the entire new record now.

A few things that bother me about the track – well, let’s talk title. It seems like KK and one or two band members sat around in a studio and said something like, “So, uh, what should we call the first track?” And someone said, “Well, how about Hellfire…uh… Hellfire… Thunderbolt!” and then KK was like, “Hellfire Thunderbolt it is then.” It seems a bit farcical. Secondly, turn the guitars up in the mix in the first two minutes of the song. This is KK’s Priest isn’t it? I want to feel those guitars right up in my grill from the first note. Thirdly, I’m hoping that this first released track is somewhat generic by design – so as not to scare people off if anything “new” is in the works.  But we all know what KK has been able to do in the past, and I’d like to hear some new types of sounds from KK.

Matt Brown: The best thing about this band is that maybe K.K. Downing will show up in the news for something other than slagging on Priest like he’s done the last ten years. Look, I can’t pretend I know all the ins and outs of his departure from Priest, but I feel like he left and then proceeded to just complain about it forever. At least now he’s actually doing something.

As for the track itself, it’s fine. The drums and guitars sound kind of thin and flat and I have to agree with Jeff that it’s a pretty uninspired title. Plus, remember how the lead singles on Priest’s last album were “Firepower” and “Lightning Strike”? Might just be a coincidence but it’s just another factor that makes me feel like Downing should have tried to make a more unique project rather than just forming his own version of Priest. Hopefully the rest of the album changes things up more, but I doubt it. I’m not exactly hyped for it but I guess it’s cool to see three former members of Priest doing their own thing. For me personally, it’s just hard to get past Downing’s years of complaining, not to mention Tim “Ripper” Owens’ implication that the 2020 election was rigged. Guess the guy hung around John Schaffer a bit too much while he was in Iced Earth.

Bram Teitelman: I guess we’re all at that point where 90s nostalgia is back in fashion. Punky Brewster, Mortal Kombat and *checks notes* Jugulator and Demolition? On first listen, this is, well, perfectly passable. Nice to see Downing back again, but that’s about it. If Judas Priest had disbanded after KK left, it’d be one thing, but their last few albums have been as good as anything they’ve put out in the past 20 years and they’re still a vital band. Ripper Owens did a great job filling in for a few albums when Halford was off doing his own thing, but I don’t know if there’s a reason for this to exist as long as Priest is still around. And echoing Matt, Ripper’s personality and politics have made it hard for me to take him seriously as a person. There’s a lot of people that will like KK’s Priest, and more power to them, but I’ll hold out for the Judas version.

Jeff Podoshen: Oh Punky!  (I mean Bram)!  Punky Brewster was the 80’s!  Your Gen X card has been revoked!

Zenae Zukowski: Punky Brewster may have been an 80s series but the reruns ran in the 90s and it was BIG. We would want to mis-match our shoes just to be like her. All jokes aside, Bram made a great point on revivals. The 2010s revived the 80s, and now it’s the 90s with nu-metal and what have you. The 2030s will most likely be the return of the 00s. And you can quote me on that. Therefore, K.K. Downing’s decision to return now is a perfect time. I see similarities and more-or-less competition with Judas Priest, such as the similar title as Matt picked up on the coincidence with “Firepower” and “Lightning Strike.” And if you think about it, it’s to be expected.

Song-wise, it’s a fun heavy-hitting track. It’s straightforward and enjoyable. Like Jeff, I also enjoyed the harmonized guitars. However, it’s nothing we haven’t heard from before, and the lyrics are standardized, nothing too innovative. “Hellfire Thunderbolt” makes me want to go back to Raven’s new album Metal City. Now that’s a group that doesn’t seem to go stale in terms of style and tenacity.

However, the heart needs time to heal. After a ten-year absence, K.K. Downing has somehow learned to put the past behind him while bringing what he loves to the forefront. And with his history with Judas Priest, I think the KK’s Priest name is well deserved. Tim “Ripper” Owens has a diverse resume, and it goes beyond his time with both Judas Priest and Iced Earth. His vocals are both strong and compelling on this track. I’m interested in hearing more when Sermons of the Sinner comes out in August. Maybe we should have an updated Headbangers Brawl to discuss the entire album?

Jeff Podoshen:  I actually thought Ripper’s vocals were ok.  I would have liked a little more power in it, but that might because of the mix.  A performance and mix like Ripper had on Iced Earth’s “This Glorious Burden” might have helped this track a bit more.

Zenae Zukowski: It is a catchy first single. I am sure Ripper has more in store once the album arrives. I’m also curious about the song “Hail For the Priest.”

Watch the video below and let us know what you think about the song: 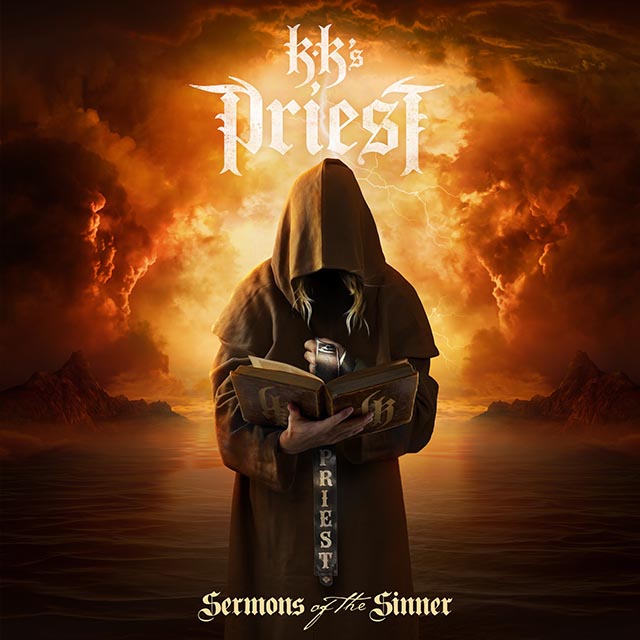