My top 5 Bay Area Thrash bands would probably be the same as everyone else’s. Here they are in no particular order…

They were the most influential of all BATM era. Gary Holt and Tom Hunting make such a unique sound, it’s instantly recognizable to the metal-heads ears! My favorite era of Exodus was the Bonded By Blood / Pleasures of the Flesh era. I was lucky enough to see them with Paul Baloff probably a dozen times before they fired him. He was one of a kind for certain and I got to know him over the years until he passed away. His chasing down of “posers” was legendary!

Nobody from this scene, and I mean NOBODY is a better live band then Death Angel! They have an extra gear that translates in a live setting that we could all get to from time to time, but they are always in that gear. Rob and Mark are the heart and soul of the new DA and they still bring the thunder to the masses night after night. They were always our good friends and we toured extensively with them in 1990, at the peak of both DA and Forbidden. From what I’ve heard thus far, the latest DA effort may be their best.

What can you say about Testament aside from they still CRUSH it?!?!?! Chuck Billy is a hero to millions of metal kids to this day. He relates to the common person better then any other front man in the genre. Eric still writes monster riffs that sound like Testament as soon as you hear them. The fact the have Alex back and Gene Hoglan on drums makes it cooler then ever these days. I’m proud of the body of work that Testament has achieved. Great guys, great band!

Back before Rob Flynn joined Vio-lence, we were already blown away by their live energy. They were a tornado of energy and epic riffing. Very unique and always of fire in the early years. Forbidden and Vio-lence had a legendary rivalry that helped fuel our entire scene with one-upsmanship. Over time they lost the edge due to the rest of the world not relating to them as well as we did in the Bay Area. It kind of broke their spirit and the folded. But that’s OK because Robb got inspired enough to start Machine Head. Obviously he’s done just fine since then…

I don’t really want to bring my own band into it, but if your talking top 5 BATM bands we’ve got to be in here. What I think we brought to the table was more melody and fearlessness when it came to songwriting and taking chances. Having a singer like Russ Anderson set us apart from the entire genre. Nobody had Russ’s power and range. To me, Russ is the most underrated singer in Metal. Unfortunately because he was so overlooked it broke his heart over the years. We worked hard to put us back on the map and did as well as we could possibly do with Omega Wave. But once we got onto the road, Russ realized he wasn’t cut out for that lifestyle anymore. 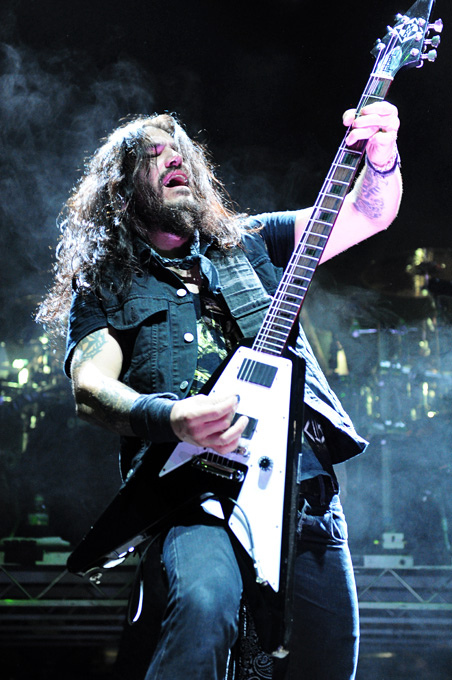