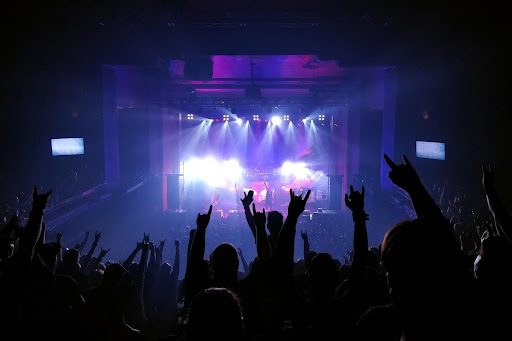 Unfortunately, heavy metal music is not represented enough in the mainstream media and entertainment. People often consider this genre too aggressive and don’t seem to find the right way to fit in. However, it has thousands of fans all around the world and one entertainment industry has seen its potential straight away. The video game industry saw the way of utilizing metal music and famous bands and incorporating them into their games for a better and more intense adrenaline-packed atmosphere. So, let’s see which are the most popular video games that feature some of the best metal bands.

Even in the 80s, game makers recognized the potential of metal music in video games. So this Irem-made platformer features some heavy metal influences clear as day. Even the characters in the game are named after some metal icons, inducing Ozzy Osbourne, Ronnie James, Slayer, and King Crimson are heavily referenced. Unfortunately, Holy Diver was never released worldwide and it was only for the Japanese market, but it is exclusive for Nintendo’s Famicom (NES) for the rest of the world.

Doom ticked a lot of boxes for metalheads. This game is one of the most popular first-person shooter explosive actions of the 90s. It features hellish enemies and some crazy good metal songs in its soundtrack, so it is no wonder that people still love remembering it. The composer for the game’s music was Robert Prince and he was heavily influenced by Metallica, Pantera, Judas Priest, and Slayer. The reboot from 2016 features even more metal-centric sounds performed by Mick Gordon, and it even won Best Music at the Game Awards.

Lordi definitely shocked the world in 2006, when they scooped the win in the Eurovision Song Contest with their track “Hard Rock Hallelujah”. They have a very distinctive look and they are instantly recognizable around the world – and of course they are from Finland. They bring a bit more fun to heavy metal and weirdly enough, they even have their own iOS video game released in 2010. The game is called Lordi The Game and you have to strike down zombie foes in time with the music. So it is safe to say that popular metal bands love having their own games featuring their best songs.

Motörhead Through the Ages

Speaking of bands with their own games, Motörhead Through the Ages is another great title with heavy metal soundtrack. This game includes some of the most iconic tracks of this band and it is uniquely mastered. The tracks are so well combined with the game and you can hear the original studio recordings. The game is also filled with a nice collection of worlds, special abilities, weapons and bosses.

Motörhead Through the Ages, however, is not the only game honoring the band’s legacy. Online casino providers also decided to turn their love for Lemmy and the gang’s music into amazing slot games. One of the best examples is the Motöhread slot provided by NetEnt you can try out here. In this slot, you will hear the biggest and most iconic hits while you spin the reel and also Lemmy’s most iconic shouts throughout the game.

Gene Simmons will sell anything and he is good at it. So, it is no surprise that this face-painted legend managed to sell a Kiss game. The Nightmare Child is a first-person shooter adapted from Psycho Circus comic books by Todd MacFarlane. The game is focused around a Kiss tribute band who imbued nicely with the original band’s apparent element powers to fight the legions of enemies controlled by the Nightmare Child. The game is utter nonsense but the fans of the band made it into a hit.

Iron Maiden: Ed Hunter was released as a bonus CD-ROM bundle, and even though it is not a full game in the most traditional sense it did become a hit. The game is focused on the Maiden revival with the return of vocalist Bruce Dickinosn and Adrian Smith guitarist, and as a player you can take control of Maiden mascot Eddie.

Quake is a spiritual sequel of DOOM and it was made by the same studio. They went straight to the source for their soundtrack and the game features pieces arranged by Nine Inch Nails’ Tren Reznor. Even though the soundtrack is light and amazing, the game can get pretty dark, so you might want to keep the lights on for this one.

This was the biggest Duke Nukem game of the 90s and it was followed by a series-spanning soundtrack album. The soundtrack featured a mix of heavy metal and hip-hop artists, including Megadeth, Coal Chamber, Sevendust, Type O Negative, and Wu-Tang Clan.

As it can be seen, metal music is heavily present in video games. It is probably due to its aggressive-like and adrenaline-packed nature that made it perfect for action and even horror games. And even though the mainstream media and entertainment shy away from this genre, we can always rely on good video games to deliver us the best metal soundtracks.