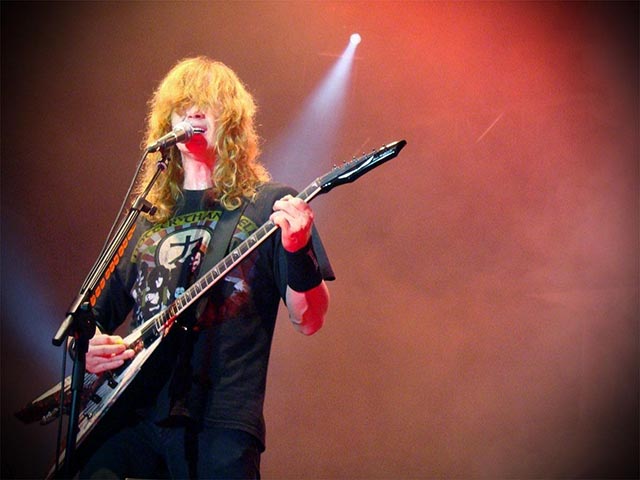 Megadeth is one of the most influential metal bands of all time, still going strong and commanding an army of fans. Their leader, singer, guitarist, and primary songwriter Dave Mustaine, has legendary status in the world of rock’n’roll and is lauded as one of the greatest guitarists in history. A member of the original Metallica lineup – though sacked by the band before recording their first album – he is not without his controversies. But as the frontman of Megadeth, he has had an indelible effect on the world of thrash metal, and his fame transcends the genre. Let’s take a look at Dave Mustaine’s story.

Mustaine was born in September 1961 in La Mesa, California into a family of Jehovah’s Witnesses. He described his early life as being unsettled and tumultuous – his father was a violent alcoholic and the family had to move many times to escape from him. In his teens, Mustaine discovered heavy metal in the form of British bands such as Saxon and Iron Maiden and was immediately taken by their music. By now he was living in Los Angeles and dealing drugs to fund his own drug and alcohol habits. He formed his first band, Panic, who played just two shows before tragedy struck – the drummer and a sound engineer were killed in a car crash, leading the band to fall apart. Mustaine began looking for another band to join.

In 1981 Mustaine answered an advert looking for a lead guitarist. The band turned out to be a newly formed Metallica, with James Hetfield and Lars Ulrich searching for bandmates. Mustaine had finished warming up for his audition when they asked him to join. Metallica went on to become one of the most successful metal bands of all time, but Mustaine didn’t get to share that success. His problems with drugs and alcohol caused frequent conflict with the other members, leading to physical fights – in the end, he was sacked during the preliminary recording sessions for what would become the band’s debut album ‘Kill ‘em All’, and he was put on a Greyhound bus back to LA. He would go on to have a feud with Metallica for the next 30 years, until the bands performed the ‘Big Four’ shows together, alongside Slayer and Anthrax in the 2010s.

Disillusioned on the ride home, Mustaine began scribbling some lyrics on the back of his bus ticket – this would give him the inspiration to form Megadeth in 1984. As well as playing lead guitar, Mustaine took on vocal duties and wrote most of the band’s material. The band’s lineup underwent many changes before they’d even released a song – this trend would continue throughout the years with Mustaine the only permanent member. The debut Megadeth album ‘Killing Is My Business’ came out in 1985, creating a big buzz in the underground metal scene. The music was more precise than Metallica’s and the lyrical content was more wide-ranging. The buzz grew much louder with their first major-label release ‘Peace Sells… But Who’s Buying?’ in 1986. The album is now regarded as a classic, and one of the cornerstones of thrash metal.

Megadeth’s star continued to rise, but Mustaine’s demons didn’t go away – throughout the 1980s and much of the 1990s he was still battling addictions to alcohol and heroin, and this led to some lackluster albums. However, there were some highly acclaimed records – 1990’s ‘Rust in Peace’, ‘Countdown to Extinction’ in 1992 and ‘Youthanasia’ in 1994. Such was the influence of Megadeth, that it became known beyond the world of metal and entered into popular culture. To this day the band remains iconic and popular, to the extent that there is a themed slot machine game inspired by this band, and it is pretty popular with gamblers. Mustaine finally cleaned up his act in 1997, getting sober and finding God through his Alcoholics Anonymous meetings.

In 2002 Mustaine was diagnosed with radial neuropathy and told he would never be able to play the guitar again. Megadeth disbanded, and Mustaine focused on recovery, going into intense physical therapy. Contrary to his prognosis he began to recover, retaught himself to play and got the band back together to record ‘The System Has Failed’ – released in September 2004. Megadeth has continued recording and touring since then, launching the Gigantour, a traveling North American metal festival. In the 2010s he officially buried the hatchet with Metallica, sharing a stage with them numerous times. Mustaine announced that he was a born-again Christian, and courted controversy with his opposition to gay marriage and increasing support for the conservative end of the Republican party. Due to his faith, Mustaine will not permit Megadeth to perform on the same bill as any black metal or satanic metal bands.

Dave Mustaine is definitely a metal legend, and Megadeth is one of the greatest to ever do it. He’s lived the rock’n’roll life, and come out (relatively) unscathed.