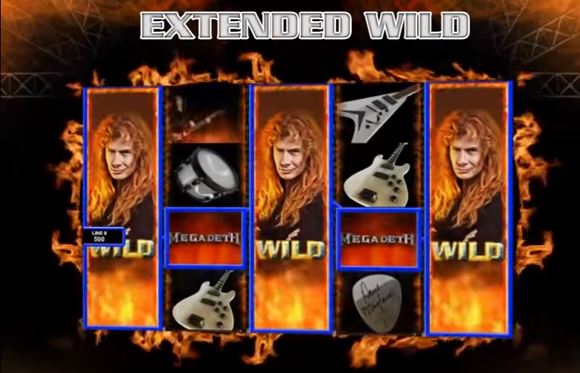 It’s no shock to see metal bands getting some fantastic coverage within the video slot world. There are some incredible slot titles out at the moment that have great licensing deals with metal bands. While there are obviously some games out there that are just using the license to bring in players, there are some that have worked hard to create games that are absolutely top shelf. We have taken a look at some of the best metal band video slots on the market right now.

The band might not be as big as it was during the late 80s and early 90s, but they’re still one of the biggest names in rock and metal. Their first album is rightly heralded as one of the greatest of all time, so how does this video slot hold up against the expectation? Well, the answer is very well. Everything about this title has been done very well. From the features to the sounds to the jackpot, it provides a really enjoyable experience. The wild symbols in the game are the most enjoyable aspect of the base game. Whenever they appear, there is a chance that they will expand to fill up a reel. With a full reel of wilds in place, you know that lots of wins can come along.

There’s also a respin feature that can fill up the second to fifth reels with stacked wilds and random multipliers that can be applied to increase wins by up to 10 times their original value. Of course, this is just small fry when compared to what the free spins feature has to offer. With this feature, players are able to get 10 free spins with increased wilds on the screen. This helps to create some really big wins, especially if a multiplier gets added to them.

Kiss is well known for being hot on licensing, with Gene Simmons often taking the brunt of this criticism. However, the Kiss video slot is a lot of fun. It provides players with some great Kiss tunes, has incredible visuals and the gameplay is really good. If you’re looking for a fun Kiss experience, then this is definitely one of the best around. It’s certainly better than the Kiss video games that have been released on home consoles over the years.

The game has two sets of reels on the board, with a colossal reel on the right-hand side. This means that there are 100 ways to win on every spin, which is a lot more than what most other slots have to offer. It also means that it’s quite an innovative game in terms of how it is played. With the wild symbols included, there are a lot of wins that can be created on every single spin. With the wager controls being quite simple to understand, you can set your stakes just how you would like.

The bonus round is a simple free spins round, which obviously adds some extra fun to proceedings. With the 100 paylines in place on every free spin, it is a lot of fun. What really makes the bonus round top notch is that it can be triggered from either set of reels. So on every spin, there are double the chances of the bonus round starting. There are just as many wild symbols during the free spins, so it’s definitely one of the better bonus rounds on the market.

This is perhaps a band that is perfectly matched to the world of video slots. Helloween has all of the showmanship that makes a great video slot and the game is an absolute blast. With tunes that come from Keeper of the Seven Keys Part I, fans will instantly fall in love with the game. Some people might even just sit and listen to the tunes without even spinning the reels. They would definitely be missing out though, as this is a great game.

The number of features that are available in this game is just incredible. There are oversized wilds, sticky wilds, expanding wilds and walking wilds just to name a few. It’s a bit of a wild extravaganza. This means that wins can come along very often, with those wilds helping to create wins on the reels. On top of all of these wilds, there is also a free spins round. This gives players the opportunity to play seven free spins, which can be retriggered. During the free spins, there can be a number of wild features that trigger too. If you love slots and Helloween, then this game should be on the top of your list.