Last week, we found out  Sepultura’s planned show for yesterday (28th) in Beirut, Lebanon was cancelled. Lebanese authorities had denied the band access accusing the group for “insulting Christianity” and being “devil worshipers.” While the band has denied these accusations, their scheduled show inevitably didn’t happen.

Today (29th), the group has issued a statement by revealing their upcoming performance in Dubai on May 2nd will be livestreamed in honor of Sepultura Lebanese fans.

“On behalf of Sepultura and staff, we would like to express to our public in Beirut our deep dissatisfaction with the situation to which we were submitted by the general security office which resulted in the cancellation of our show that would take place yesterday (Sunday, April 28th) at The Palace.

In 35 years of history, it was the first time we had our entry blocked in a country by a false interpretation of our purposes and values since our intention has always been to promote unity and freedom of expression through music, without making any political, racial or religious distinction.

To try to compensate everyone who, like us, are frustrated with what happened, we would like to invite you to watch the live broadcast of our upcoming Dubai concert on May 2 in honor of all Sepultura Lebanese fans who could not watch us in person.

We’d like to thank Skull Session, Sepulnation around the world, all media that has published anything related to this subject, and Embassy of Brazil in Beirut for all the support. 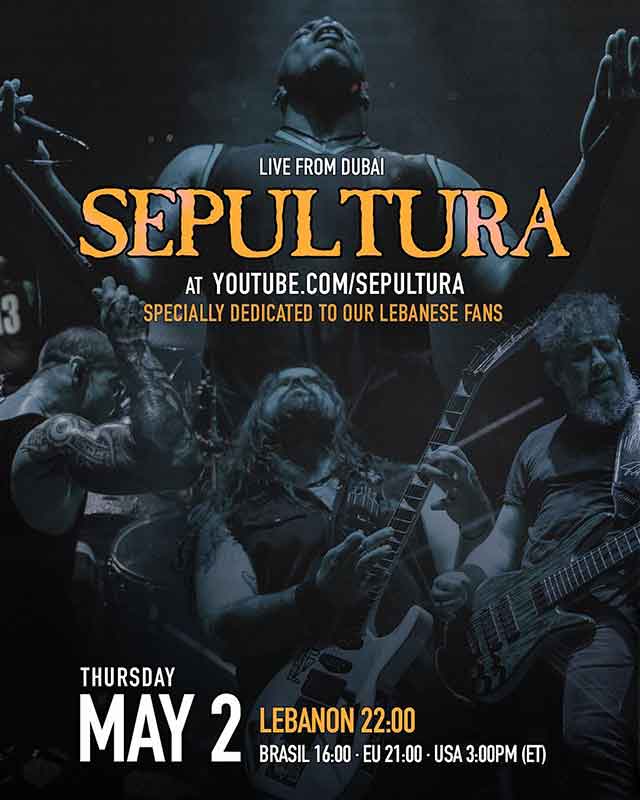