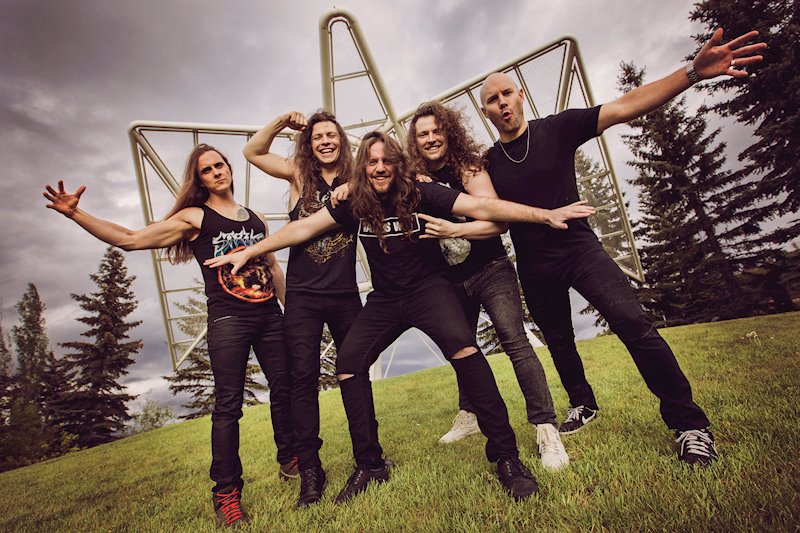 Canadian heavy metallers Striker recently wrapped up their North American tour with Unleash the Archers and are currently touring overseas in Europe to promote their latest effort Play To Win, which was released on October 26th (order here). The group has consecutively released a new album every year since 2016’s Stand in the Fire as they continue to excel in their electrifying tunes – live and on record. We spoke to guitarist Tim Brown about the band’s overall sound, goals, new album, and more.

How would compare Play to Win to your prior efforts?
I’d say that this one, there’s a little bit more of everything. We really looked to the heavy metal legends and the greats and the really great albums we thought were the best metal albums of all time. Kind of looked at the ingredients that the bands used to make the music and what kind of songs are on those albums. One thing that we really found that I guess we were kind of lacking a lot of was a lot of these kind of slower songs, songs that have some softer tendencies to them. On this album, we really tried to kind of explore some of that new material. At least it’s new for Striker. I think it turned out really well. We really like how it panned out. Trying to sneak a ballad in there. Worked out great for us I think. 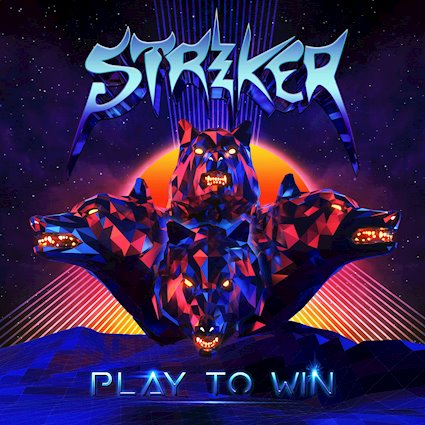 Definitely. It’s an awesome album. Definitely combines the classic thrash, heavy, power metal styles together and that’s what we need right now. Can you share the writing process?
For the last three albums at least, all of our independent albums, we’ve recorded and produced them and done the engineering and all of that fun stuff. We’ve done it all ourselves, in our home studio. What our recording process is like is basically we all get together and just have a day of listening to everyone’s ideas and demos that they might’ve come up with, whether it’s a fully finished song with guitar solos and vocals, or maybe it’s just a guitar riff. We just listen to everything and kind of think, “Where do these ideas go? Are these good ideas that we should be working on for an album?”

Then we kind of rank them all, and take the top half. Then we whittle away on those songs for another month or two, see what we come up with, and then we do the whole process again. What’s left is the songs that usually end up on the album. I think going through that process, doing a couple drafts, it really weeds out the weaker parts of different songs, things like that.

You guys have been releasing an album every year since 2016, has this been intentional?
Not really. We just like to write music. Some people when they come home from work like to watch TV or play video games or go to the gym. Maybe they like cooking. I don’t know, but when we come home we like to pick a guitar and noodle around. That’s what we’ve always been doing. We have a lot of music. We kind of never stop. There’s always something to tinker with, and that’s the nice thing about being an independent band. When we have enough music, we can just crank an album out. It’s been really great, and I think putting out an album every year has been really great for us as a band. We’re really starting to turn some heads out there.

You guys are definitely impressive both live and on record. As I said earlier, it’s what we need right now. How would you describe yourself to somebody who has never heard of you guys before?
Oh, that’s a tough one. We’re kind of like a mix of all kinds of different heavy metal styles and throw in some hard rock and stuff like that in there too. I was saying earlier that a good comparison would be something like Toto versus Slayer. There’s a lot of really melodic parts, a lot of vocal harmonies, vocal melodies, stuff like that, and then also we have a lot of this really heavy thrash. There’s a lot of whammy bar squealy noisy parts, so there’s a little bit of everything in there. For us, at least, we like to listen to all kinds of weird stuff, and we try to figure out what’s best and what makes each kind of music and what makes certain songs listenable. What draws people to those certain types of music. We try to incorporate that into our own music. We’re kind of like a mix of all your, hopefully, your favorite metal bands.

What do you guys have planned for 2019?
So far, we’re already planning our next North American tour and our next European tour, and we’re also trying to get some tours down in places like South America and over in Asia like Japan. Eventually going down to Australia. That’s what we’re trying to do.

Would you guys do 70,000 Tons of Metal again?
Absolutely. That festival is incredible. I mean, we’re definitely praying at the altar of 70,000 Tons. That festival is really great. Can’t say enough good things. I think the one really interesting thing about that festival is that there’s no backstage. You could be walking around and there’s artists everywhere. The artists and the fans just intermingle. On so many occasions, I’d go down to a bar, one of the bars on the boat, and there’s someone from some big band. You just hang out, and you have a good time. It’s a really cool place to be.

​I remember you guys were playing at like five o’clock in the morning on both nights or something.
Yeah. We were the breakfast shift on I think it was the second day, and then we were the last band on the main stage on the second to last day.

There’s been a lot of major band such as Slayer and Kiss that are on the road to retirement. Who do you think would be the next generation’s major band?
Well, I hope it’d be us. It’s kind of interesting with just how the music industry is going. Basically, for hard rock and metal, the biggest bands are always legacy acts like Slayer,Kiss, Metallica, Iron Maiden. They’re still the big name draws that they’ve always been, and there’s going to be some big shoes to fill when they aren’t touring anymore. There’s a lot of new … Well, I shouldn’t say there’s a lot, but there certainly are some younger bands out there that are able to play at similar sized venues. I think it was Avenged Sevenfold earlier this year was on a big tour. They were playing arenas and stuff. Ghost is also really big. Bands like Lamb of God and Behemoth, they’re up there with the other headliners at big festivals and stuff. That’s what we’re trying to do. We want to work our way up and to be able to play those kinds of shows as well.

You guys definitely have the formula for it.
Yeah.

What has been some of your biggest challenges so far?
I think probably some of the biggest challenges is just cutting through the noise out there. In the modern music industry, there’s so much music coming out all the time because it’s just so easy to put music out, which is a good thing. I suppose it’s a double edged sword just because there’s an average fan is inundated with all kinds of music. People are constantly advertising at you trying to get your attention, and it’s really hard for anyone to make a noticeable impact. I mean, just getting someone to click on a Striker banner or click on your posts or even just check your band out, it’s not very special these days for you to go up to someone like, “Oh, I’m in a band. You should check out my band.” Nobody really cares.

There’s definitely this difficulty, and I think it exists for all modern artists these days. It’s just trying to get noticed. It’s really difficult. Striker’s always had really great reviews and things like that in the press, but it doesn’t always translate to people coming out to your shows or album sales and things like that. You got to really get out there and make an impression on the fans, which is hard to do.

That’s a great perspective. With the internet, you can always be a photographer, musician, artist, anything nowadays. Definitely understand with that. Moving onto a positive note, can you name a few of your favorite newer metal bands from Canada?
From Canada? Well, as a matter of fact we just finished a tour with Unleash the Archers and Helion Prime, which was great. Unleash the Archers are fellow Canadians from Vancouver that we did five weeks across North America. It was a really great tour. We had, I think 10 sold out shows in a row on the East Coast. I think about half the shows were sold out across North America. Then in just about over a week we’re going to Europe with Skull Fist. Another co-headlining tour. Doing two co-headliners with two fellow Canadian acts. We’re really looking forward to it. There’s a lot of Canadian bands out there right now that are kicking ass in the metal scene.

Is there anything else that you want to add or say to your fans?
If you want to check us out, striker-metal.com is our website. We’ve got our music videos, ticket links, our shows. We’ve got merch is up there. All kinds of fun stuff. Also big shout out to Taco Bell, who we just got a Taco Bell endorsement, so that’s really awesome. It’ll keep us full on the road. Get some much needed nourishment, which is really great, through their Feed the Beat program where they help out touring artists in North America. We’re really proud to be part of that.