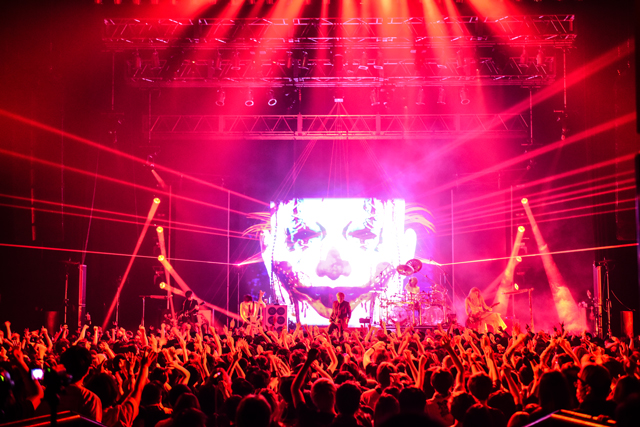 Japan’s avant-garde metal phenomenon, Dir En Grey, masters of the bizarre, uncommon and uncanny, have returned to North America for the first time since 2015. With a headlining tour, TOUR19 This Way to Self-Destruction, consisting of eight dates in the U.S. and one in Mexico throughout December. We caught up with the group discussing a range of topics including 2018’s The Insulated World and their overall return to the States.

Die: The biggest difference on this record was that we worked with a new engineer, Dan Lancaster, who we’ve never worked with before. It took us some time to get to know each other and for him to understand our music, so communication was key this time.

Thematically, your albums are always changing and treading new grounds. How do these themes usually form? Is it a group effort?

Die: Yes, it’s a group effort because as we work on the music, Kyo is writing lyrics which shapes the world around the album. Everything is tied together and we go with whatever feels right at that time.

Compared to previous albums, how was recording The Insulated World as an experience? Were there any particular moments that stood out to you?

Toshiya: Recording this album wasn’t much different than previous albums, it always feels like we’re fighting against time with every album we record. Time and time again we wrap up just before our deadline. Always a rush but a good one! As for moments that stood out…unrelated to our recording process but our engineer was expecting a baby and I remember how anxious he was waiting for his wife to give birth while we were int he studio.

What kind of shows do you prefer to play: smaller venues or festivals? Which setting do you think Dir En Grey thrives in?

Kaoru: When headlining shows in Japan, we have our core crew with us and many times we’re playing in venues we’ve become so accustomed to. In that sense it’s always more comfortable, just because you know what you’re getting into. Festivals in general are more unpredictable and you’re brining your live show to unfamiliar terrain but that’s definitely not the reason why we don’t do them as much. Being on stage in any setting is always exhilarating for us.

It has been four years since your last tour in America. Do you think the shows will be wildly different or a familiar experience?

Shinya: I don’t think it’s that much different but who knows what will happen once we’re on stage. I have to say that the songs we play now are more exciting and with a different feel all together. I think the general perception of our songs is different today as compared to four years ago. You would have to come and see for yourself to experience this.

What are some things the band likes to do to pass the time whilst on the road? Are there any touring traditions?
Toshiya: When I have time, I like to take a walk around the neighborhood where our venues are. It’s always great to see what’s going on in the cities we visit.

Has performing your newer songs been challenging or has it been a smooth process from your years of experience?
Kaoru: When we first play our songs it’s not just about technicality on stage but it’s also about how the audience reacts. There are a lot of things we’re not able to foresee until we perform new songs on stage for the first time, so in that sense it’s always difficult or challenging to play the new songs.

What do you think the future holds for Dir En Grey? Can fans expect more US tours in the years to come?

Shinya: We just kicked off the North America tour and we’re looking forward to seeing our fans react to the new songs. If all goes well, we would definitely like to come back, every year if possible. So we hope the response is positive!

Tour Dates for TOUR20 This Way to Self-Destruction (Europe & UK):